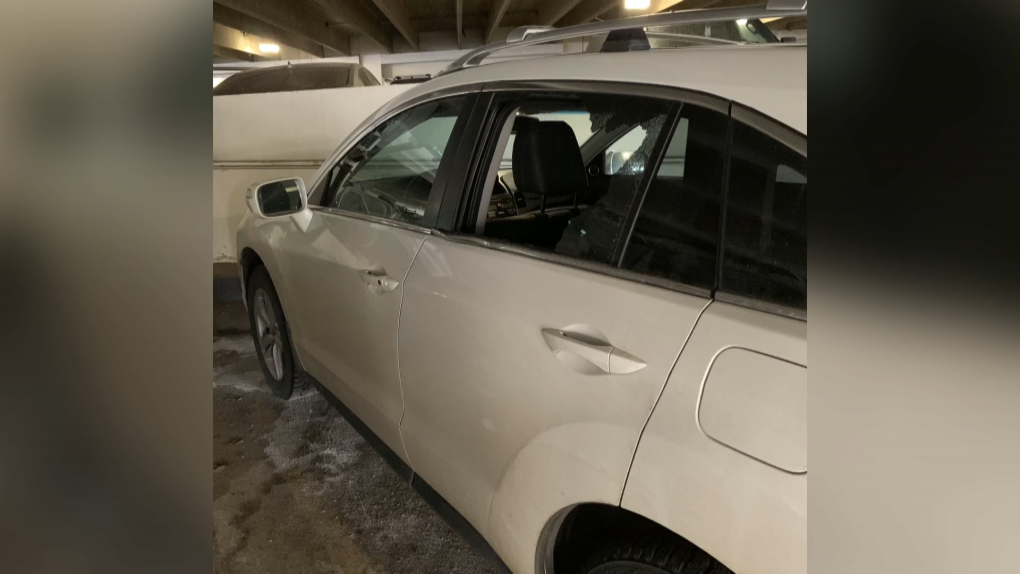 Nurse Kim Ewasiuk returned to her car after a shift March 14 to find her window smashed, a door damaged and a bag stolen. (Submitted)

EDMONTON -- Edmonton police have arrested a man on 38 charges related to fraud and break-and-enter following a series of vehicle break-ins at the University of Alberta hospital.

A Whyte Avenue beat officer spotted the suspect on Friday at around 8:50 p.m. on his bicycle, recognizing him from being wanted in connection with vehicle thefts in the Strathcona neighbourhood.

"The officer gave chase and subsequently caught up to Harnum, who had fled on foot north of Whyte Avenue and 107 Street, before taking him into custody," police said in a news release.

The officer found break-and-enter tools and drugs on Harnum, according to police.

He faces 38 charges including two counts of theft under $5,000, 14 counts of fraud from various credit card purchases, 14 counts of using a stolen card and three counts of possession of stolen property. More charges could be pending.

AHS told CTV News earlier this week it had seen an increase in vehicle break-ins amid the COVID-19 pandemic.

"I felt so violated that someone would do this to a healthcare worker who's trying to give up their time to help others," said Kim Ewasiuk.

Parking is currently free at AHS facilities due to the pandemic.

Anyone with additional information on the break-ins or who has had their car broken into recently in the Strathcona area is asked to call police at 780-423-4567 or Crime Stoppers at 1-800-222-8477.

With demand on the rise, PM says thousands of companies offering to make COVID-19 supplies

Intermittent physical distancing might be a thing until 2022, research suggests

Cytokine storm: How COVID-19 patients' immune systems may fatally turn on them