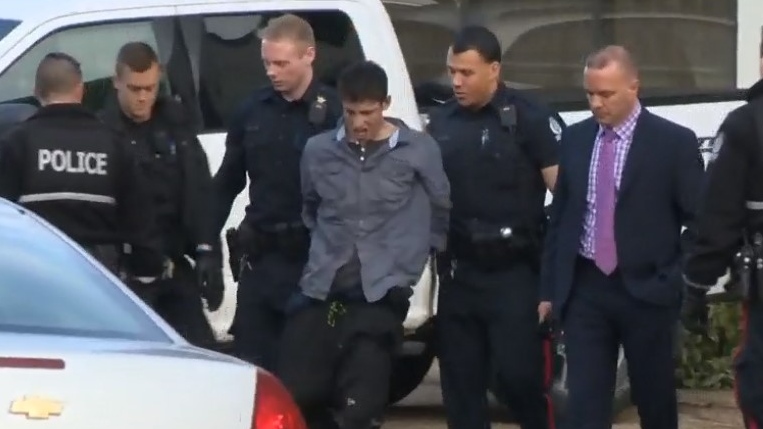 Mario Bigchild is seen while being arrested after a 30-hour crime spree in September of 2018 that involved several robberies and a stabbing.

EDMONTON -- The man who stabbed another man five times at an Edmonton LRT station has been sentenced to more than six years in prison.

Mario Bigchild, 26, was sentenced by an Alberta Court of Queen's Bench judge on Wednesday.

Bigchild was sentenced to serve four years for aggravated assault and three years for subsequent robberies.

He was also sentenced to six months, to be served consecutively, for attempting to disarm a police officer.

Bigchild's total sentence of seven 1/2 years was reduced to six 1/2 years. With credit for time served, he has around three 1/2 years remaining to serve.

Bigchild was on a 10-day crystal meth binge when he stabbed the man, who was a student and not known to him, in the chest and torso as the South Campus LRT Station on Sept. 18, 2018, according to an agreed statement of facts.

Before the attack, the two were chatting while waiting for the northbound train to arrive.

Bigchild would later tell police he stabbed him because the man was "a predator," which Bigchild determined "based on a look in a nearby woman's eyes," the agreed statement of facts reads.

The victim survived the incident but is still dealing with the emotional fallout from the incident, the court heard.

Bigchild fled and proceeded to punch a clerk and rob a gas station before stealing a vehicle.

Police located him through a tracking device on that vehicle but Bigchild struggled with the arresting officer, assaulting him and managing to escape.

He was later arrested with a gas station bag with stolen money and cigarettes. The knife used in the stabbing was found on a LRT track with his DNA on it.

Bigchild told court he wasn't in the right mind at the time of the assault and robberies.

"I want to apologize from the bottom of my heart to the victim," he said.

"I hope you can forgive me for what I did."

Crown prosecutors sought 11 years in prison for stabbing and robberies in what they termed a case of "extreme violence."

The defence argued for four years in prison with three years of probation.