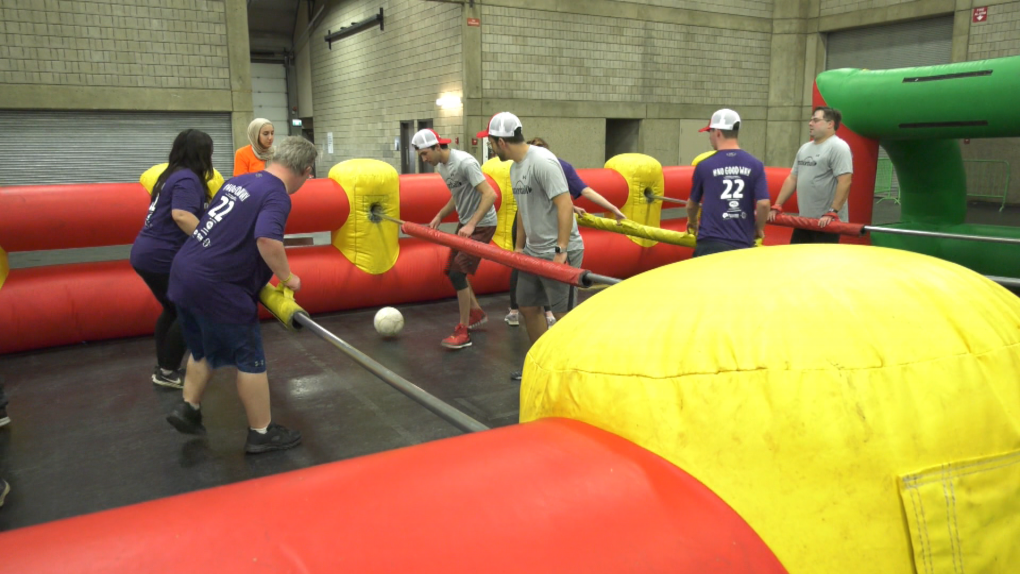 Human Foosball is just one of the less traditional sports on offer at the 2022 Marathon of Sport. (CTV News Edmonton/Brandon Lynch)

Athletes of all abilities headed to the Edmonton Expo Centre Saturday to compete and raise some cash at the sixth annual Marathon of Sport.

The one-day inclusive multi-sport tournament is a fundraising and community engagement event by Motionball. Special Olympic athletes are paired with teams of fundraisers to compete and raise money for the Special Olympics Canada Foundation.

Celeste Soete, volunteer event director, said around 160 people were out Saturday to enjoy a day of sports. She added that there is always a wide variety of sports to play for all levels of ability and athleticism.

In addition to more conventional sports like floor hockey, volleyball, basketball and soccer, there were also some alternative options – like bench ball and human foosball.

"I'm the first to admit, most of these sports I'm pretty bad at," she said. "That's the cool part about this event, that it's based around inclusion. So it's meant to be an event that anybody can participate in."

"People are just here to have fun, celebrate inclusion, build a more inclusive sporting community and just kind of show off how talented our special olympic athletes are."

Motionball is a national organization dedicated to raising money and awareness through events focused on special athletes, and the Edmonton chapter has raised over $280,000 for the Special Olympics Foundation since 2017.

"It's something that we really look forward to," said Nick Mohr, who has been bringing a team all six years that the event has run. He added that it's a great day of sport and the opportunity to compete alongside – and against – Special Olympic Athletes.

Chinese military jets conducted several intercepts of a Royal Canadian Air Force patrol plane as it flew surveillance sorties from Japan as part of an international effort to enforce sanctions against North Korea, the Department of National Defence confirmed Tuesday.

Former President Jiang Zemin, who led China out of isolation after the army crushed the Tiananmen Square pro-democracy protests in 1989 and supported economic reforms that led to a decade of explosive growth, died Wednesday. He was 96.

The Ontario government intends to appeal a court's decision that struck down a controversial bill that limited wages for public sector workers.