EDMONTON -- When Christina Borys agreed to join her girlfriend of five years for a walk in Garneau on Sunday, she wasn’t expecting to come home with an engagement ring.

Shannon Cox had made a donation to Metro Cinema in exchange for a custom message on the Garneau Theatre’s marquee.

“I knew I had to embarrass her,” Cox told CTV News Edmonton. “Hundred per cent.”

The message read: “Will you marry me? (Plz say yes, this cost me good money!)”

The couple has spent a lot of time at Metro Cinema throughout their relationship.

“We’ve always come and seen movies and stuff like that, it’s always been use like an important thing that we do together,” Borys said.

“We love Metro and we really wanted to help support them, so I thought what better way but [by] popping the question as well,” Cox said. 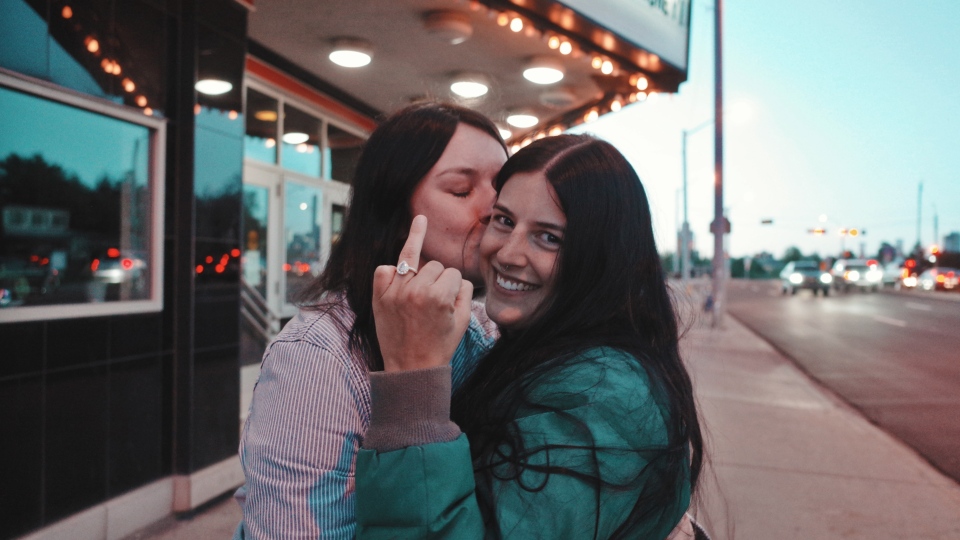 Metro staff started offering custom messages in exchange for donations at the beginning of the pandemic.

Metro Cinema executive director Dan Smith says it started as a way to stay connected with the community and bring in some revenue while the theatre was closed.

“People have been really supportive, and that’s meant a lot,” Smith explained. “This marquee thing has definitely been a part of it.”

Smith says they recommend a $150 donation, but payments have ranged from $100 to $500. To date, there have been roughly 30 custom messages, from kudos for 2020 grads to anniversary notes. There has even been another proposal.

“Very excited to be a part of that,” Smith said.

Borys said ‘yes’ to the marriage offer, and though the method caught her off guard, she was expecting the gesture.

“We kind of like went in on the ring together, and then at a certain point I got kicked off the email chain,” Borys recalled.

The couple is planning to for a long engagement. They’re hoping to wait out the worst of the pandemic so they can celebrate with a large group of friends.