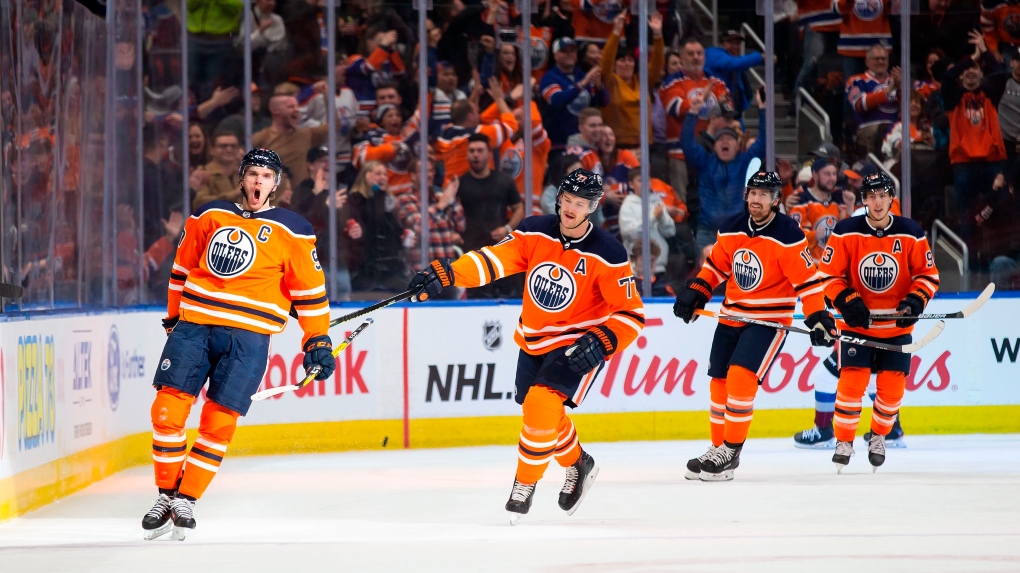 EDMONTON -- Looking to bounce back from a disappointing loss to the Sharks just two nights before, and after a day off on Wednesday, the Oilers responded in record-setting fashion, as Connor McDavid and Leon Draisaitl combined for a whopping 11 points in a 6-2 win over the Colorado Avalanche on home ice on Thursday.

“We Just go about our business, every day we try and get better and try and help the team win every night and tonight we had to step up.” Draisaitl said of his and McDavid’s performance.

The tone of this game was set early on with a big hit by Zack Kassian.

Less than 30 seconds into the game Kassian laid out on Avalanche forward Nathan Mackinnon, sending him flying into the boards, prompting him to drop the gloves in a spirited tilt with Matt Calvert and sending Rogers Place into an early frenzy.

“We were ready to play, the players talked about it far more than I did,” Oilers head coach Dave Tippett said after the game.

“No one liked how we played after the game in San Jose and we wanted a bounce-back game and that line went out and started it early,” Tippet said of the team’s opening shift.

The spark was a little delayed for the Oilers however, as the Avalanche would open the scoring less than a minute after the fight. While battling traffic in front of his crease, Mike Smith let in the opening goal, on Andre Burakovsky’s shot from the slot, set up by Nazim Kadri.

But then the Oilers unleashed an avalanche of goals on Colorado, in large  part to contributions of McDavid and Draisaitl and a solid night on the powerplay.

After a two-goal game on Sunday against the Ducks in Anaheim, Ryan Nugent-Hopkins got the ball rolling on a nice set up from McDavid.

McDavid carried the play into the offensive zone, dropping a pass at the blue line for Nugent-Hopkins who stepped into the slot and wristed one top corner on the blocker side of Avs' goalie Adam Werner, who was playing in his second game of the season.

Draisaitl also picked up his first point of the night on the play and it was just the tip of the iceberg for the NHL’s hottest duo.

And Tyson Jost’s tripping penalty was the spark that lit the fuse.

Less than thirty seconds into the penalty, Colorado defenceman Ian Cole failed to poke the puck out of the zone on a diving attempt. McDavid picked up the puck, stepped around him and then ripped a shot from the faceoff dot to Werner’s left, beating him far side for his first goal of the game.

Draisaitl set him up nicely, working his way around the net, feeding the puck across the crease on the wraparound leaving Kassian with a tap in for his seventh goal of the season and the 3-1 lead. McDavid also picked up an assist for his third point of the game.

McDavid would add to the lead a few minutes later, on another power play marker. With Ryan Graves serving a high sticking penalty, McDavid again carrying the play into the offensive zone, deked through a couple of defenders and the found an open shooting lane between the two other defenders from the slot and buried his second power play goal of the game. Draisaitl and Klefbom picked up the assists on Edmonton’s fourth goal of the period.

McDavid completed the hat trick early in the second, and again it was on the power play. With Alex Chiasson planted in front of the net, the puck was worked around to McDavid who put one past Werner, giving the Oilers a commanding 5-1 lead and ending the Avalanche goalie’s night. He was replaced by Antoine Bibeau after allowing five goals on 18 shots.

“I wouldn’t want to be on the other side,” Draisaitl joked when asked about defending McDavid. “But sometimes there is just nothing you can do, he’s just too good.”

After Burakovsky scored his second of the game for the Avalanche, the Oilers would respond with the man advantage.

After scoring just one goal through the first 18 games, Nugent-Hopkins registered his second two-goal night in three games late in the frame. It was the first power play goal not scored by McDavid, though he was in on it.

From the corner, McDavid spotted Nugent-Hopkins open in the slot, his shot beating Bibeau to extend the Oilers lead to 6-2, capping off the career night for Edmonton’s leading scorers.

“They took some penalties and we were really effective tonight,” Klefbom told reporters after his three-assist night. “I’m not surprised they got a lot of points, but it’s very impressive.”

The career nights for McDavid and Draisaitl have catapulted them to the top two spots in the scoring race. Draisaitl’s 5 points gives him 41 on the season, while McDavid’s six points gives him 37, six points ahead of Boston’s David Pastrnak whose in third with 31 points.Mike Smith played solid in net for the Oilers, making 31 saves in the win.

The Oilers host the Dallas Stars on Saturday before embarking on a five-game road trip.