Ben, who has been diagnosed with glioblastoma, a type of brain cancer, won the hearts of Edmontonians after showcasing his love for the Oilers.

The tiny super fan has been a staple at home games over the last month, and the team is 9-0-0 when he’s been in attendance.

Ben has undergone numerous rounds of chemotherapy and radiation. Despite that, his tumour returned last December, and he’s still in the midst of his cancer journey.

As such, the Edmonton Oilers Community Foundation has announced that it is partnering with the Alberta Cancer Foundation and the Kids With Cancer Society as part of their mega 50/50 draws, which will take place during the first round of the playoffs.

“We are absolutely thrilled that the Edmonton Oilers Community Foundation chose the Kids with Cancer Society as a beneficiary for Round 1 of the playoffs,” said Val Figliuzzi, Executive Director, Kids with Cancer Society. “Our organization’s mission is to support children just like Ben and his family and with the support of Albertans through the 50/50, we will be able to expand critical family programs that are not offered anywhere else.”

The jackpot will build each day, and nine early bird prizes will be available.

In addition to being named playoff ambassador, Ben has also been honoured with his own officially licensed Oilers trading card. 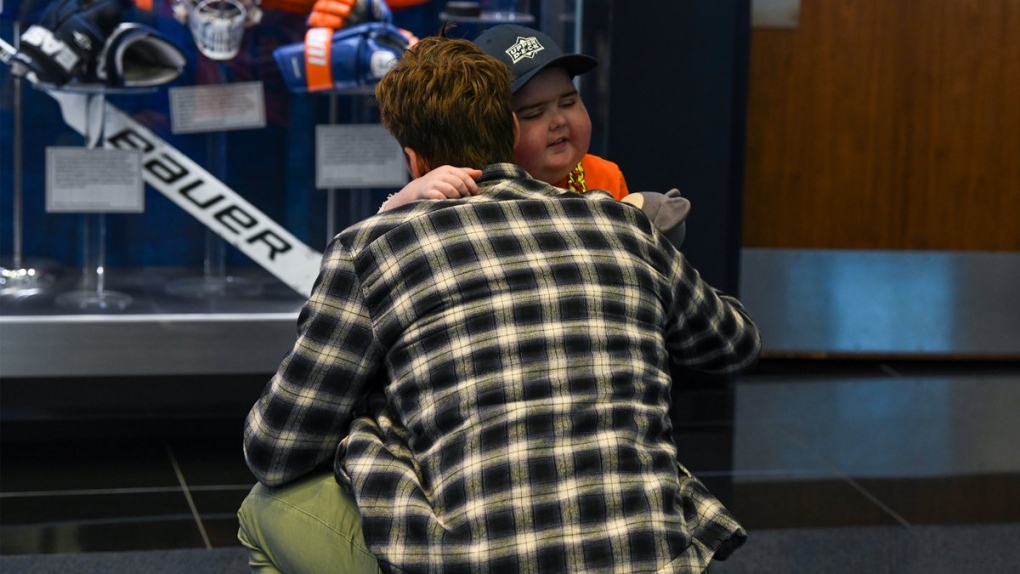 Ben Stelter was presented with his own official Oilers trading card by Connor McDavid on April 28, 2022. (Source: Edmonton Oilers)

On Thursday, Ben attended the Oilers morning skate. Afterward, he was presented with his trading card by his favourite player, Connor McDavid.

A limited number of the cards were handed out at the Oilers game against San Jose on Thursday night.

Thank you so much for doing this for Ben! He is so excited and we are so grateful! https://t.co/t8zxmktPIm

A mass shooting survivor and spokeswoman for gun-control group PolySeSouvient says it is 'incredibly disrespectful' for firearm rights advocates to invoke the group's name in a merchandise sale discount code.

The deaths of four University of Idaho students nearly three weeks ago have riled up thousands of would-be armchair sleuths, many of whom are posting speculation and unfounded rumors about the fatal stabbings online.

After 300 hours of testimony, 9,000 exhibits and a few major revelations, the public portion of an investigation into the first-ever use of the Emergencies Act ended Friday with a deep dive into questions about government accountability and transparency.

Hockey Canada says there were more than 900 documented or alleged incidents of on-ice discrimination -- verbal taunts, insults and intimidation -- across all levels and age groups during the 2021-22 season.