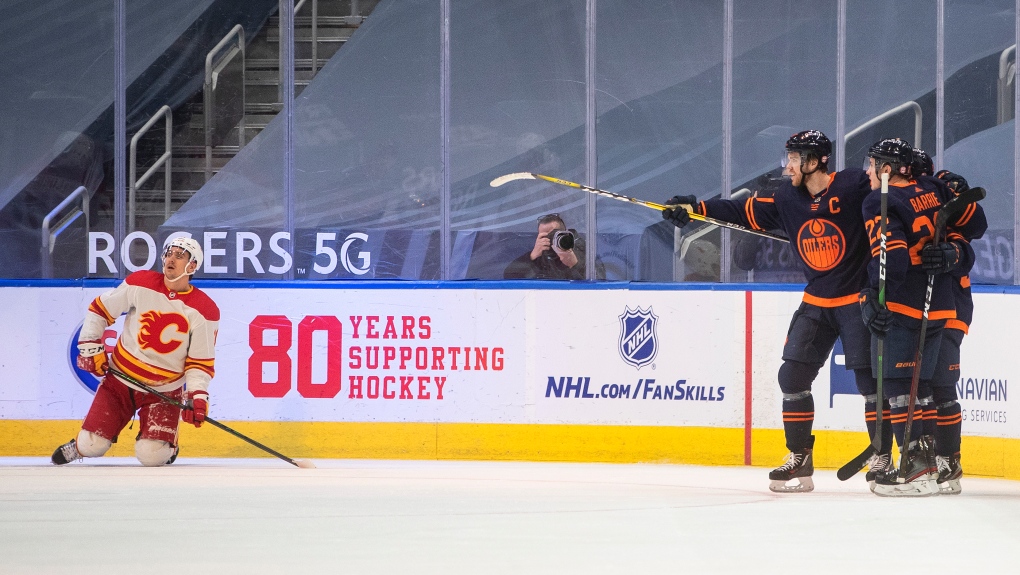 EDMONTON -- The latest installment of the Battle of Alberta ended up being the perfect place for Connor McDavid to snap his pointless streak, and help his team snap a losing streak.

McDavid ended a three-game pointless streak with a three-point night in a 3-2 Edmonton Oilers win over the Calgary Flames Saturday at Rogers Place in Edmonton.

The superstar had a hand in all three Oilers goals, scoring one and adding two assists. McDavid had been held pointless in his previous three games, all losses to the Toronto Maple Leafs.

“I think it's a big win,” McDavid said. “When you're sliding like we were, sometimes it's tough to find a way out of it. I thought we did a good job as an entire group of just staying with it, sticking with it. Holding on to that game even though we probably didn't get off to our best start.”

Jesse Puljujarvi and Kailer Yamamoto also scored for the Oilers (15-11-0).

Johnny Gaudreau and Noah Hanifin scored for the Flames (11-12-2). It was their first game following the firing of Geoff Ward earlier this week. He will be replaced by Darryl Sutter.

“I thought we had a really good start,” Hanifin said. “It was a pretty back and forth game after that. It's a rivalry game. It's always going to be competitive. It stings as a loss. But I think we competed. If we play that way and we compete that way, we'll have more success than not.”

Mike Smith made 34 saves on 36 shots in a winning effort while Jacob Markstrom made 30 saves on 33 shots.

Gaudreau opened the scoring with a power play goal in the first period. He one-timed a shot past Smith after taking a cross-ice pass from Elias Lindholm. Sean Monahan also picked up an assist.

By the end of the first period, Smith had seen his fair share of rubber, having made 20 saves.

Not long after, Edmonton defenceman Darnell Nurse and Calgary forward Milan Lucic dropped the gloves in a spirited tilt in front of the Flames bench. Not to be outdone, Oilers forward James Neal and Calgary forward Matthew Tkachuk also exchanged fisticuffs with a little over three minutes to play in the first period.

“I loved it,” McDavid said of the fighting between both teams in the opening period.

“(Nurse) taking on the big man is something special and it for sure got us going. (Neal) to drop them with Tkachuk obviously is an emotional one for our group and got us going as well. Hats off to both of those guys.”

The Oilers would eventually equalize with 2:59 remaining in the second period. Jesse Puljujarvi put a bouncing puck past Markstrom, with assists from Kris Russell and Connor McDavid. McDavid snapped his pointless streak with the assist.

The Flames would retake the lead in the third period thanks to a goal from Hanifin, his first of the season. But Calgary's lead would last for less than five minutes as Yamomoto leveled the score for Edmonton.

McDavid would give his team their first lead of the night with less than four minutes to go, scoring his 15th of the season and his fourth game-winning goal of the year.

The Oilers will play the Ottawa Senators in Edmonton Monday night. The Flames will meet those same Senators Sunday night.

NOTES: The Edmonton Oilers paid tribute to Wayne Gretzky's father, Walter, prior to puck drop. The team played a video commemorating the late father of the Oiler great before holding a moment of silence. Walter passed away Thursday at the age of 82....Calgary Flames assistant coach Ryan Huska served as coach behind the bench. Incoming head coach Darryl Sutter will join the team Monday.

This report by The Canadian Press was first published March 6, 2021.