A growing segment of people wanting to document themselves or health care workers in clinical settings has brought issues of privacy to the front lines.

“We’re definitely seeing an increase in it,” says Dr. Bill Sevcik, Chair of Emergency Medicine at the University of Alberta. “We see people taking pictures, selfies in care spaces. I always ask why, what’s their motivation, and sometimes its morbid curiosity.”

A recent study published by the University of Saskatchewan shows the rising popularity of smartphones in hospital spaces has patients and clinicians at odds over the desire to record medical procedures. Over 61 per cent of patients in the study believed they should be allowed to document their own treatment, with only 28 per cent of medical professionals sharing their opinion.

In an age where so much of everyday life is recorded, shared and commented on through various online platforms, patients like Edmonton’s Casey Francisco are posting commentary and images of what was once deemed personal and private.

“You’re in a hospital, you’re overwhelmed, you’re tired, you’re hungry, you don’t know what’s going on. Going to social media is like a refuge,” he says. “How can I get the message out to everyone I know and who cares, and I have an almost immediate support group.”

Sevcik understands a patient’s need to understand complex diagnosis and communicate with family. He has concerns with intrusion of privacy, medical confidentiality and distraction during important treatments.

“My personal opinion is, I’ll let them take a before and after picture,” he asserts. “I’m not into having them video me doing a procedure. I’m focused on the procedure.”

Alberta Health Services (AHS) also has concerns with this trend and is developing new policies to address the evolving issue. In a statement, AHS says issues of infection control and privacy for staff and other patients has it currently prohibiting video or photos for social media taken in its facilities.

Francisco respects concerns for privacy and says his hospital recordings were always done with only himself on camera. The urge to share his experiences was driven by support and a need to understand what he was going through. He admits recording some situations may have other consequences.

“Having a camera in front of you and recording, it kind of makes you more accountable. The health care professions, if they are being recorded, it’s definitely holding them to a higher standard and a little bit more transparent.” 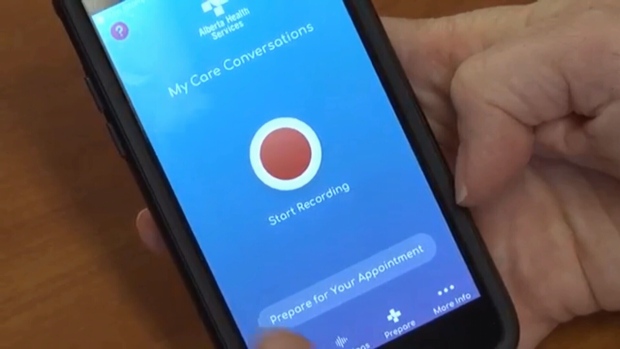 The unblinking eye of social media and opinions resulting from a brief online video are of great concern to Sevcik. He says context is often lost in such recordings and complaints about the speed of service or the quality of medical treatment can be an unfortunate result.

Until new policies or technologies come out address everyone’s healthcare information needs, he recommends coming to appointments with AHS’s app, My Care Conversations. An encrypted platform, it allows for recordings of appointments, prescription and treatment information to be easily documented and shared securely.

“It cannot be altered, so it gives physicians a sense of security that the context will be there,” Sevcik claims. “And we know it won’t be altered or adjusted if there is a complaint or concern.”

All sides agree discussions over allowing cameras in medical treatment spaces will continue.

“Social media is so natural these days, it’s an extension of how people communicate,” says Francisco. “All the while, we have to make sure we’re respecting the legality of it and people’s private information, and we’re being respectful of people’s private space.”