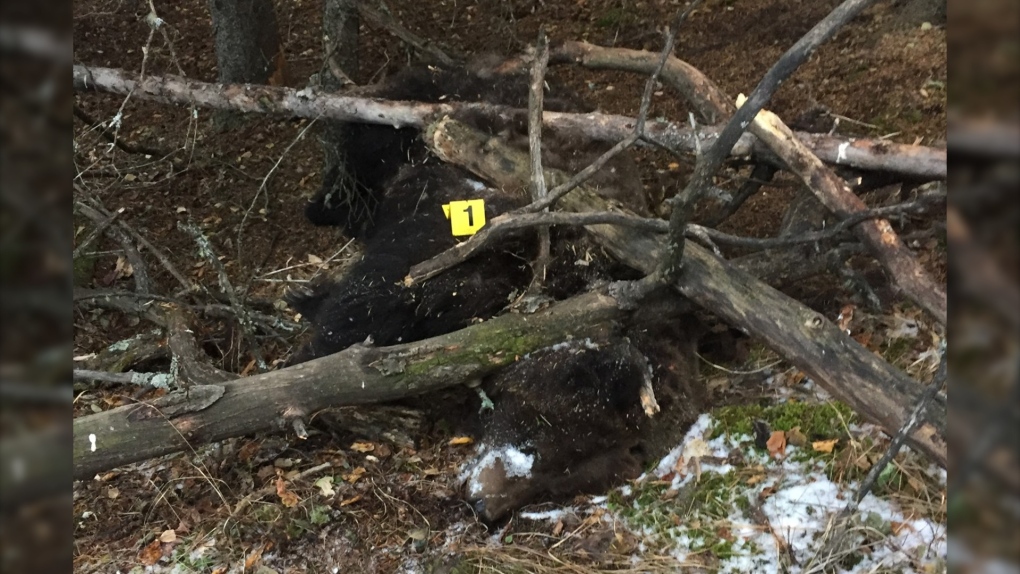 Two men were each given a one-year conditional sentence and a three-year hunting suspension for killing a grizzly bear in 2018. (Source: Facebook / Alberta Fish and Wildlife Enforcement)

EDMONTON -- Alberta Fish and Wildlife says two men have been fined $22,000 for the illegal killing of a grizzly bear that also led to an assault.

Officers say in a statement that they received a report about the death of the bear on Nov. 5, 2018.

The person who reported the killing also reported being assaulted and threatened.

Officers say it all took place at a random hunting camp in the Indian Graves area in southern Alberta.

An investigation determined that two days earlier the grizzly bear had been feeding at a meat pole, where the two men had hung deer carcasses they had hunted.

The investigation found that the men decided to shoot the grizzly when it returned later that evening.

“When the other campers asked why the shot was fired, the suspects told them that it was just a warning shot,” said the statement on the Alberta Fish and Wildlife Enforcement Facebook page.

“The following morning, the witness who reported the incident to fish and wildlife officers found a dead grizzly near the meat pole site.”

The witness collected evidence from a trail camera and took photos of the bear and vehicles at camp.

Officers said the men assaulted the witness when they saw him taking the photos and tried to force him to give up his cellphone password by threatening him with an axe.

“The other campers intervened and convinced the suspects to return his cellphone and let the witness go,” said the statement. “Other campers from nearby camps also witnessed the assault.”

Officers went to the scene and interviewed the suspects - one of whom confessed to his involvement in killing the grizzly and showed officers where the carcass had been dumped.

The officers collected evidence at the scene and said they found no grounds for self defence.

Both men were given a one-year conditional sentence and a three-year hunting suspension.

They were fined a total of $22,000 for killing the bear and for unlawful possession of wildlife.

Grizzly bears are listed as threatened in Alberta.

This report by The Canadian Press was first published Nov. 24, 2020.