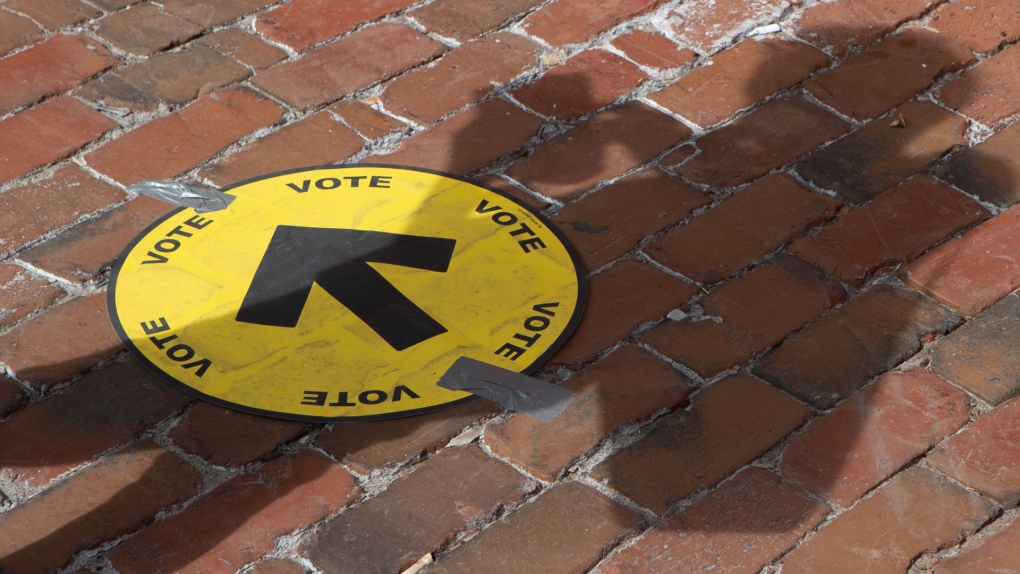 A voter queues at a poling station to cast their ballot in Toronto's Spadina-Fort York district on Monday September 20 , 2021. THE CANADIAN PRESS/Chris Young

Forty residents of the Village of Big Valley who showed up to vote in the municipal election's advance poll Oct. 9 only had the chance to exercise a portion of their democratic right.

Big Valley village council heard at a special council meeting conducted through Zoom Oct. 14 that those 40 voters didn't get senate or referendum ballots.

Village Chief Administrative officer (CAO) and returning officer Tracy Mindus reported on the mistake that occurred at the polls.

“The Village of Big Valley held an advance vote on Sat. Oct. 9, 2021 where only the municipal ballots were offered to electors,” stated Mindus' report to council.

“The returning officer was advised by Municipal Affairs on Tues. Oct. 12, 2021 that the 40 electors that attended the advance vote would not be allowed to vote again on Mon. Oct. 18, 2021 in the senate and referendum.

Elections Alberta was in consultation with Municipal Affairs. The two agencies did not reach a mutual agreement by the end of the day on Wed. Oct. 13, 2021.”

Mindus stated in her report Elections Alberta contacted legal advisors about the issue and eventually told her that the village council had some options open to them, including a “ballot box sealing procedure.”

“Council may go into closed session to review legal opinion as per Section 27 of the Freedom of Information and Protection of Privacy Act,” stated Mindus.

Mayor Clark German stated that the Elections Alberta information could have legal ramifications for the village and recommended moving into closed session to discuss it.

Closed session is a power councils have to conduct their meeting in private.

At this point Coun. Harry Nibourg stated it appeared there was an opportunity to let the 40 Big Valley residents vote in the senate and referendum ballot and suggested it be offered Oct. 18 or perhaps allow people to drop off at the village office.

Mayor German stated he preferred to discuss such matters privately.

“To honour the process...I think it's best we go into closed session,” said German, which the councillors agreed to do at about 1:07 p.m.

They came out of closed session and back into the public meeting at about 1:20 p.m.

Mindus' report went on to state, “The 40 electors could be contacted and be offered the opportunity to submit their ballot for the senate and referendum, following the voting procedure outlined in the Local Authorities Elections Act and with the attached procedure for sealing the ballot box for two days.

“This would satisfy the requirement of offering the democratic right to the electors.”

Mindus further explained the method to solve this problem: a special ballot box would be available Oct. 15 and 16, plus the official election day of Oct. 18, for the 40 people who weren't allowed to cast their senate and referendum ballots.

The box would be safely stored and left unopened until the election was over and the ballots ready for counting.

When the 40 people in question arrived on those days, they would be identified and directed to the special ballot box. The identification process would include the 40 people signing their initials on official voter forms along with the returning officer's initials.

German stated he was comfortable with the proposal and felt it protected the integrity of the voting system.

Councillors passed three resolutions unanimously: essentially they agreed to approve the special ballot box system for the 40 voters in question, approve the identification process for those voters and authorized the returning officer to contact the 40 people in question and inform them about their chance to submit senate and referendum ballot.

At the end of the meeting Mayor German asked if the public had any questions, to which the ECA Review asked why the 40 voters were not given senate and referendum ballots at the advance poll Oct. 9. German responded there was a “...misunderstanding on protocol associated with executing the election” resulting in the impression that senate and referendum ballots were to be given out only on election day, Oct. 18.

Contacted Oct. 15 by the ECA Review Elections Alberta stated Big Valley was the only municipality to have this problem. “We are not aware of this situation occurring in other municipalities,” stated Pamela Renwick, Acting Deputy Chief Electoral Officer, in an email.