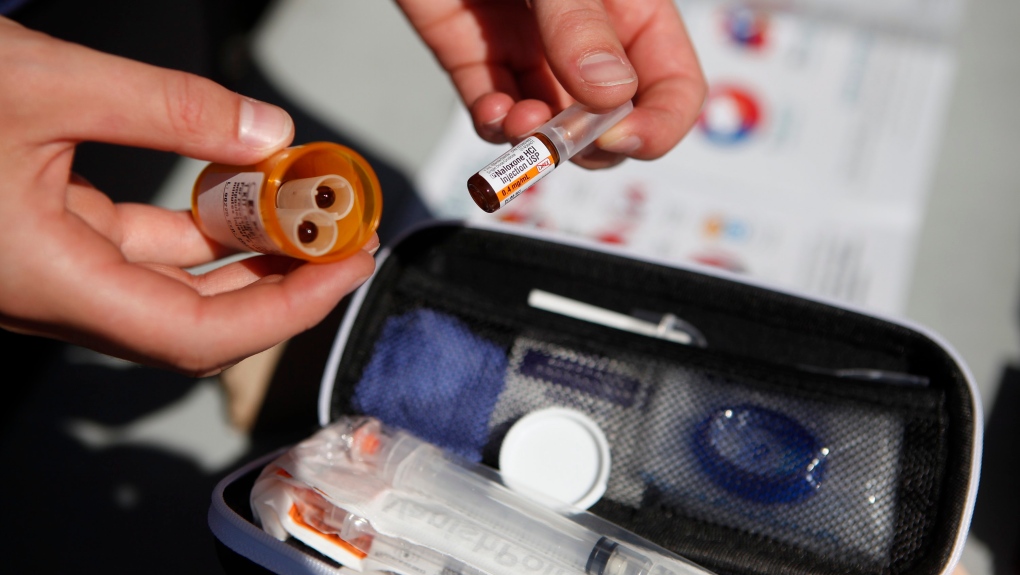 An organizer displays a naloxone kit that people can pick up for free as International Overdose Awareness Day training seminar takes place at Centennial Square in Victoria, B.C., on Saturday August 31, 2019. Naloxone is a medication that reverses the effects of an overdose from opioids such as heroin, methadone, fentanyl and morphine. THE CANADIAN PRESS/Chad Hipolito

EDMONTON -- Northern Alberta Mounties are issuing the same warning southern colleagues did a week ago: the drugs at the centre of two overdoses may have been laced with fentanyl or carfentanil.

On Saturday, two 911 calls within 10 minutes sent officers to opposite ends of Peace River, a town of nearly 7,000 about five hours northwest of Edmonton.

At one home, a 55-year-old had consumed what they had believed was heroin.

A 44-year-old in the other home had given themselves a purple powder intravenously. They needed naloxone on scene.

Both were taken to hospital.

"These two events occurring so abruptly are worrisome due to the level of increased risk of overdose when fentanyl or carfentanil are involved," Corp. Michelle Phillips said.

RCMP say their investigation into the source of the suspected contaminated street drugs is still in the preliminary stages, but are encouraging anyone with information to come forward.

"Anyone can help protect the public by providing information, sometimes all it takes is one small detail to save a life," Phillips added.

RCMP said, "Had it not been for the fast actions of those around and the immediate response by emergency medical personnel, these two individuals may have had a very different outcome."

Little more than a week earlier, three young adults were pronounced dead after being found unresponsive in a Drumheller home.

A day later, an 18-year-old woman died from a suspected overdose on Piikani Nation.

Investigators wouldn't say the deaths were related, but in both instances issued warnings that street drugs could be contaminated.