'Ahead of the rest of Canada': Pharmacies helping Alberta pull ahead in second dose distribution

EDMONTON -- As Albertans wait to hear the province's strategy for rolling out second doses of COVID-19 vaccines, some are finding their own ways to get that follow-up shot.

The National Advisory Committee on Immunization (NACI) released new guidance on Friday, now saying with an increased supply of vaccine doses in Canada second rounds should be given "as soon as possible."

The NACI had previously recommended second shots be delayed by up to four months.

When asked about the new NACI guidance on Friday, Alberta Premier Jason Kenney reiterated that the province's plan for second doses would be announced "early next week."

"It is important to underscore that we are well ahead of the rest of Canada already, in administering second doses," the premier said.

Government of Canada data shows, as of May 28, 4.61 per cent of the total population in the country had received a second dose of a COVID-19 vaccine.

According to Government of Alberta statistics, as of May 26, 8.1 per cent of the total population in the province had been given a second shot.

Provincial stats also show over 70 per cent of Albertans over the age of 75 are now fully vaccinated.

Kenney said more than 1.1 million vaccines are expected to arrive in the next month, and as of Thursday there were close to 550,000 appointments booked for first doses.

"That shows you that we're now getting enough quantity that we can do both," said the premier.

'PHARMACIES HAVE BEEN WORKING INCREDIBLY HARD'

With over 60 per cent of eligible Albertans having received their first dose, at least some of the 1,300 Alberta pharmacies assisting with the vaccine roll out are already doling out second round shots.

One Edmonton pharmacist told CTV News Edmonton his pharmacy has vaccinated roughly 3,000 Albertans since March. Access Pharmacy co-owner Dennis Cai said they have yet to waste a single dose. 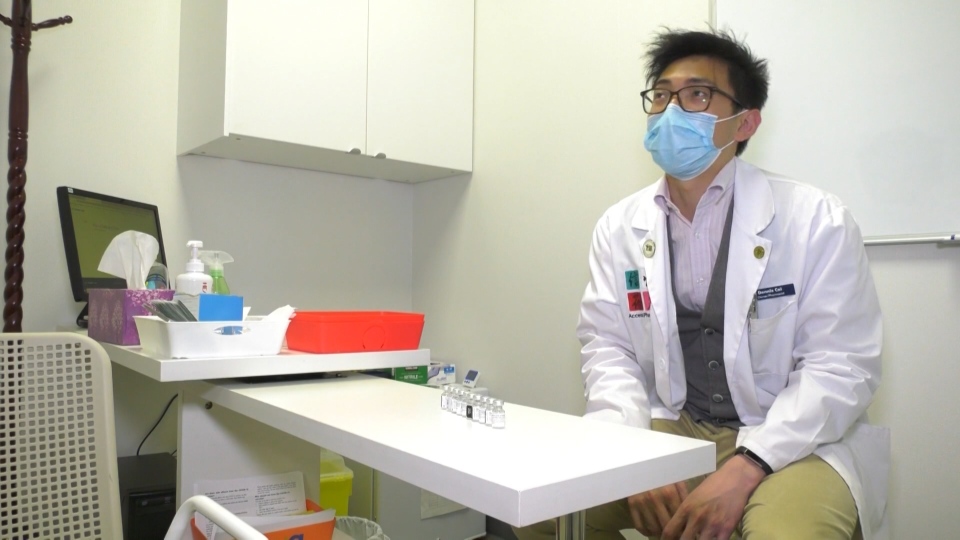 Cai said there are times when administering a second dose is the only option besides wasting it.

"When we open a vial we only have six hours to administer it," he said. "So let’s say someone doesn’t show up, that’s usually when we’ll call for a second dose, if we absolutely can’t find a first dose."

andddd i’m officially FULLY vaccinated. scored my second dose of Pfizer from a small pharmacy that had doses that would have been wasted. Don’t be afraid to ask around. #YEG

Several Edmonton pharmacies CTV News Edmonton spoke to said they too have been giving out second doses in order to prevent wastage.

According to Alberta Health spokesperson Tom McMillan, pharmacies have vaccine wastage guidelines that include the distribution of second doses to prevent them from expiring before being used.

"The order of waitlist priority in these situations, if no one needing a first dose is available, is first those who are currently eligible for a second dose, and then the oldest person available," McMillan said in a written statement to CTV News Edmonton.

"Pharmacies have been instructed to administer second doses in keeping with the provincial timelines," said McMillan. "Pharmacies have been working incredibly hard to support Albertans during this challenging time. We could not safely rollout this vaccine without them."

One day before the new second dose guidance was released by NACI, Alberta Chief Medical Officer of Health Dr. Deena Hinshaw hinted that the province could soon change its position too.

“We are looking closely at our available supplies and shipments," Hinshaw said on Thursday, "and we expect to be in a position soon to shorten the wait time between first and second doses. We will outline how this rollout will occur as early as next week.”