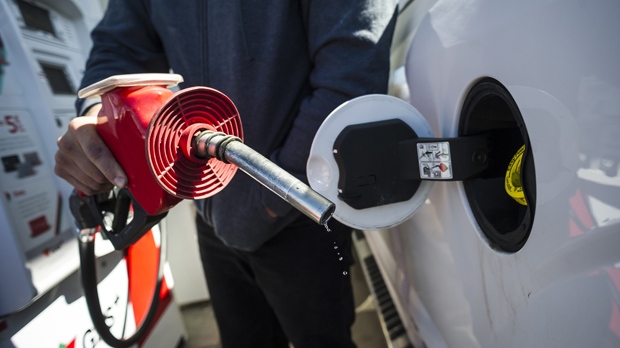 A man fills up his truck with gas in Toronto, on Monday April 1, 2019. THE CANADIAN PRESS/Christopher Katsarov

EDMONTON -- The Alberta Court of Appeal is to release its decision today in the province's challenge of the federal government's carbon tax.

Lawyers for the province argued in a hearing in December that the justification Ottawa has given for imposing the tax doesn't meet constitutional muster.

Much more is known about it, she said, and the severity of the threat has greatly increased.

The federal case rests on the Constitution assigning powers necessary for peace, order and good government to Parliament.

The carbon tax flows from the federal government's right to sign international treaties, Telles-Langdon added, and is part of living up to climate change accords such as the Paris agreement.

She noted that the carbon tax grew out of a 2016 deal between the federal government and the provinces, in which all agreed that carbon pricing shouldn't make businesses in one part of the country less competitive with others in another region.

Alberta's lawyers said allowing the federal carbon tax law to stand would give Ottawa a tool it could use to repeatedly chip away at provincial powers.

Lawyer Peter Gall said instances when the Constitution allows Ottawa to step in are rare and that the climate crisis doesn't meet the test. He said if greenhouse gases are a matter of national concern, that label could be applied to anything.

Lawyers for attorneys-general in Ontario and Saskatchewan presented arguments in support of Alberta's challenge. British Columbia sided with Ottawa.

Ontario lost its challenge of the tax in a 4-1 ruling in its Appeal Court last year. Saskatchewan also lost its attempt to upend the tax when three out of five Appeal Court judges ruled against it.

Other judgments from the Supreme Court have recognized the environment as a shared federal-provincial jurisdiction.

The Supreme Court has agreed to hear Saskatchewan's appeal of the lower court ruling in the spring.

This report by The Canadian Press was first published Feb. 24, 2020