After six years, a one-of-a-kind Alberta whisky is ready to be tasted – if you can get your hands on a bottle.

The Beast, named for the 2016 Fort McMurray wildfire, is a limited-edition whisky flavoured by the fire. Available exclusively through auction, only 20 bottles are left and they're going for thousands of dollars.

Bryce Parsons is a master distiller, and he said the idea for The Beast was born after his crew from Fort McMurray Wood Buffalo Brewing was evacuated in 2016, leaving a pallet of heavily peated Scottish malt out.

When the team returned, Parsons said the malt was still there and it was still good.

"I said, 'Don't throw it out. I think we can do something with that.' And that's where it started,"he explained."

Flavoured by the wildfire, and tested for safety, the malt was used to craft a truly one-of-a-kind Alberta spirit.

"It's the first whisky ever released in the world that's been directly influenced by a natural disaster," Parsons said.

"Initial thought was, 'Let's make the whisky. Let's see how it turns out, and then let's see if there's any way that we [start] generating to give back to the community using a product that we made,'" he said. 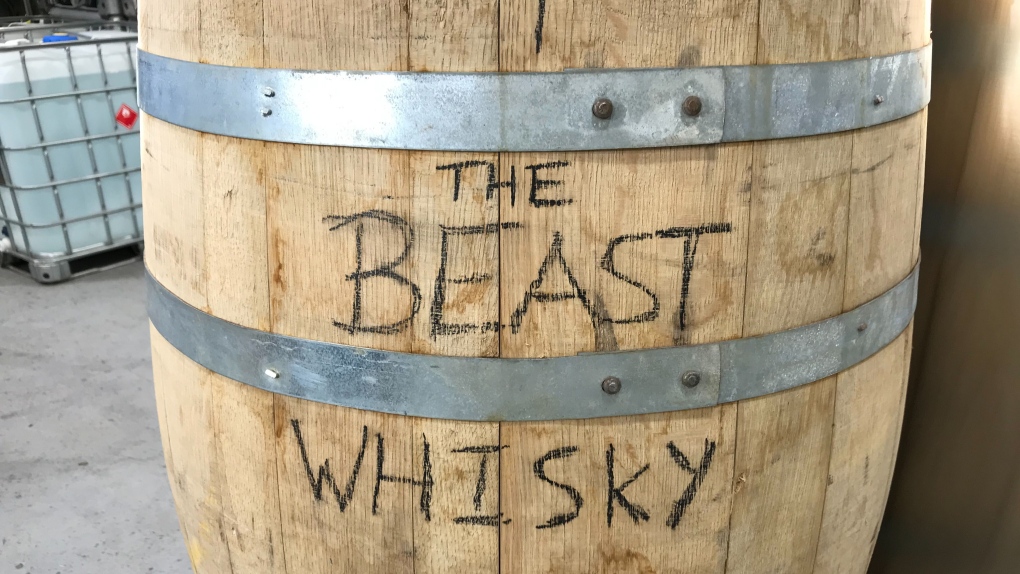 Only 20 bottles of The Beast, a Alberta whisky flavoured by the 2016 Fort MacMurray wildfire, are left and will be available only through auction. (Nahreman Issa/CTV News Edmonton)The project presented an interesting opportunity to give back to the Fort McMurray community, and he said the team decided to auction off the whisky and give the proceeds to local charities.

Despite the whisky not being ready to bottle until six weeks ago, Parsons said 30 of the 50 bottles made have already sold for a total of more than $140,000.

"From what I know, I think that is the most expensive bottle of Canadian-made whisky ever in history," he said. "It shows what that community is all about."

All the proceeds from the whisky are going to the Fort McMurray Firefighters Charities Association, which distributes money to other local organizations.

The 2016 wildfire, nicknamed The Beast, forced around 90,000 northern Albertans from their homes. The fire, which at one point stretched over 580,000 hectares, destroyed entire neighbourhoods and caused billions of dollars in damage.

Parson said it's wonderful to see, that even six years later, people continue to support the community. He's happy to have been a part of that and to finally be able to deliver the bottles to their owners.

"For a lot of people, this product is a symbol of that time, it's probably one of the only things of that time that someone can open up and reflect [on]," he said.

"Time heals and they're getting through it. They're a resilient community up there and I was very happy to make this product for them."

Parsons said at least one more auction is planned and will be held in Jasper, Alta.

Justice Minister David Lametti says he will "look at" a federal policy that restricts gay and bisexual men from donating to sperm banks in Canada, after CTV News exclusively reported on Wednesday that a gay man is taking the federal government to court over it.

'Dances With Wolves' actor appears in court in abuse probe

A former 'Dances With Wolves' actor accused of sexually abusing Indigenous girls and leading a cult must remain held without bail until his next court hearing, a judge ordered Thursday morning.

Former Wagner commander says he is sorry for fighting in Ukraine

A former commander of Russia's Wagner mercenary group who fled to Norway told Reuters he wanted to apologize for fighting in Ukraine and was speaking out to bring the perpetrators of crimes to justice.

As rates of sexual assault climb across Canada, nursing experts say there is a shortage of specially trained forensic nurses to properly care for victims.