The line outside Canada Place in downtown Edmonton started forming at 1:30 a.m. on Thursday.

Braylene Saddleback knows because when she and her partner arrived at the office on Jasper Avenue at 2:30 a.m., there were already two people who had started to queue.

The couple had arranged for someone to take care of their two-year-old son overnight so they could wake up at 1 a.m. and drive the hour north to Edmonton from Ponoka. They packed lawn chairs, blankets, pillows, and snacks: garlic sausage, cheese, grapes, chips, water, and candy.

"Well, you have to wait here all day," Saddleback pointed out.

And she knows that because this is the third time the couple has made the trip into Edmonton to see if they can get the passports they applied for at the beginning of April. For their previous attempts, they arrived too late in the day to even step foot in the office.

"What would you think? Like, $1,000?" she asked her partner, Shantzton Buffalo. He nodded. "About $1,000 in the past two weeks. Just on gas and food and making sure our kid's looked after, just to come here."

Their plight is not unique. Dozens of people were lined up behind Saddelback and Buffalo when the doors to Canada Place opened. 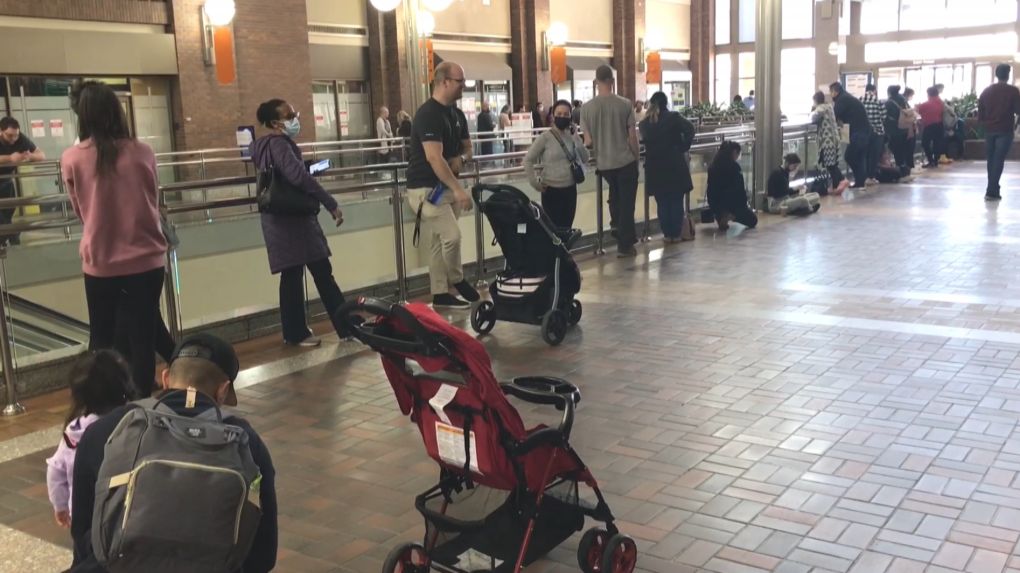 Across the country, passport offices are dealing with a surge of applications and lengthy waitlists. According to the federal government, a fraction of the passports that are normally filed in a year were filed over two years of COVID-19, so during the pandemic, passport staff were given other work. Now, Service Canada is trying to shift that workload elsewhere, hire more staff and open more access points, but has no idea when the backlogs will be resolved.

The situation – that citizens would soon need to catch up on passport renewals, would be booking international travel at the first good opportunity they had to do so safely, and the first 10-year passports issued would soon need renewing – should have been foreseeable, Conrad van Dyke told CTV News Edmonton.

His daughter, Anneke, has a flight booked for Friday to Michigan to see her best friend for the first time in a couple of years.

The family enlisted the help of their MP, who, unlike them, was able to reach Service Canada by phone, so they didn't have to line up at Canada Place. But the route didn't guarantee them success.

"The person in the MP's office who had to do it, it was hours. Like nine o'clock this morning to at least two this afternoon, that they were on hold. That's from an MP's office," Anneke said.

The last update they received was to expect a phone call and appointment Thursday, hopefully before Anneke's engineering course final exam.

"Passports are an essential service," her dad said.

"Something has to change. They do need to get their act together and work hard to find ways to speed up the process."

According to a federal government website that allows Canadians to check wait times at passport offices, the estimate for Jasper Avenue was more than four hours.

But Shawn Chisom, who's been lining up for two weeks with the hope of keeping a Friday flight to Las Vegas, says that's not quite accurate.

"If you're not within the [first] 20, they close their doors. That's what happened to me over and over again," he told CTV News Edmonton Thursday morning.

He has four passports to renew so that his family can visit his mom and other relatives in Sudan at the end of June. At $3,000 per ticket, the stakes are high for Elawad.

"We're asking: Why is the passports taking long time? What's the issue? Why? What's the problem? How are we going to fix this one?"

In a statement to CTV News, Service Canada explained there's an increased demand for passports after COVID-19 restrictions were eased across the country.

The agency said it has hired 600 new employees to help ease the strain and returned to pre-pandemic staffing levels in early May.

Since they were at the front of the line, chances were high that Elawad, Saddleback and Buffalo would all make it through on Thursday.

Their flight is scheduled for Friday.

"If not, I guess going to school was for nothing," she joked, turning sombre again quickly.

"I feel bad for some of these other people, though, because they actually have dire things they need to attend to."