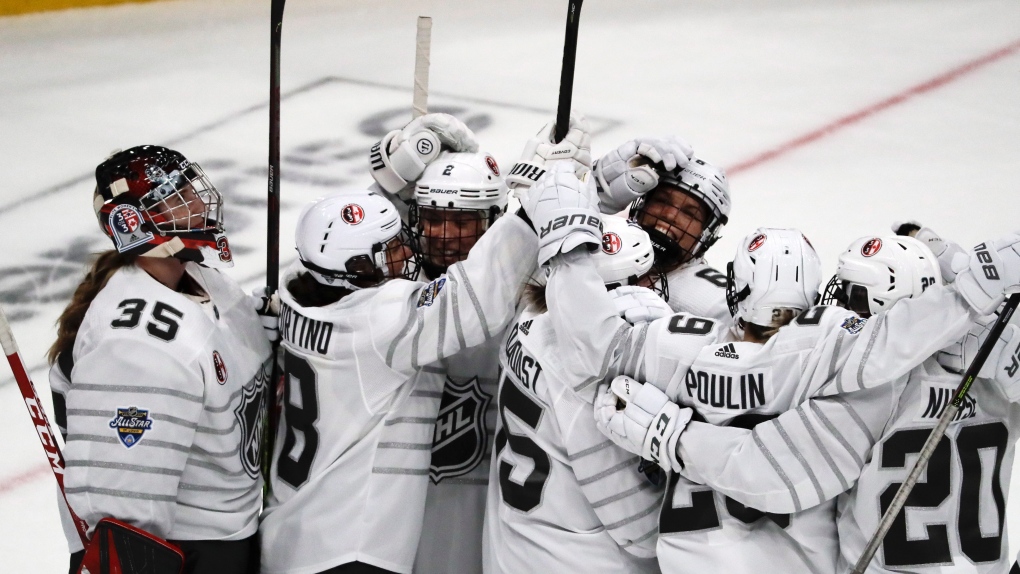 ST. LOUIS -- On a night where pucks rocketed from the stands, hockey's best player was dethroned as its fastest skater and a hulking defenceman regained the hardest shot crown, women took centre stage at the NHL all-star skills competition for a second straight year.

And they hope that exposure will eventually lead to brighter days down the road.

Canada beat the United States 2-1 in a spirited 3-on-3 game between female players Friday that featured big saves, breakaways and a physical element.

While the showcase didn't have the intensity of a true international, fans inside Enterprise Center chanted “U-S-A! U-S-A!” seconds after the opening faceoff.

“It was a fabulous event,” Canadian forward Sarah Nurse said. “For the current state of women's hockey and what we're doing this year, it was the perfect opportunity to really get that visibility and exposure.”

The 20 players invited to take part in the 20-minute contest are all members of the Professional Women's Hockey Players' Association (PWHPA), which rose from the ashes of the Canadian Women's Hockey League after it folded last year.

PWHPA members have thus far refused to join the five-team U.S.-based NWHL because they don't believe the model is financially viable in the long-term.

Rebecca Johnston and Melodie Daoust scored for the Canadians, while Hilary Knight replied for the Americans.

Kendall Coyne Schofield turned heads at the 2019 skills competition in San Jose in the fastest skater event, while Brianna Decker impressed with her deft puck-handling talents. Female players were also on hand at the 2018 all-star game in Tampa, Fla.

“It's only a small piece and a small step forward,” Knight said. “But we can continue to make those steps together.”

In terms of the NHLers on Friday, New York Islanders centre Mathew Barzal knocked off three-time defending champion Connor McDavid as the fastest skater with a time of 13.175 seconds.

“I couldn't have skated a better lap,” Barzal said. “I don't know if I could do it again.”

McDavid, who suffered a serious knee injury at the end of last season, actually posted a quicker time (13.215 seconds) than his three previous victories. Barzal's mark was just 0.003 seconds off of the record set by Detroit's Dylan Larkin in 2016.

“He flies,” McDavid, the captain of the Edmonton Oilers, said of Barzal. “He skates like the wind.”

Apart from the women's 3-on-3 game, another addition to this year's all-star festivities was the so-called “Shooting Stars” event that saw players positioned on a raised platform behind one of the goals fire pucks at a variety of targets on the ice.

“It's a little bit gimmicky,” said Kane, who was booed loudly by Blues fans throughout the night. “But I understand where they're trying to go with it ... trying to create some different events.”

“We were elevated pretty high,” he said. “It was just a weird feeling. You don't really know how much power to put into it or anything ... I kind of blew it.”

St. Louis goalie Jordan Binnington thrilled the hometown crowd by claiming the save streak/shootout challenge with 10 straight stops - including one on San Jose's Thomas Hertl as he sported a Justin Bieber mask.

Montreal Canadiens defenceman Shea Weber got the nod in the hardest shot competition with a 106.5-mile-per-hour bomb, just ahead of Washington Capitals blue-liner and defending champion John Carlsson's 104.5. Weber won the event three straight times from 2015 to 2017, but wasn't named to the all-star game the last two years.

“They looked gassed,” Buffalo Sabres captain Jack Eichel said. “The pace was non-stop ... 2-1 in a 3-on-3 game? That says a lot about their compete level.”

Friday marked the biggest stage the NHL has ever provided the women's game - one that only ranks below the Olympics. The players are banking on it eventually leading to a sustainable league in partnership with the NHL.

“I'm thrilled that we have an opportunity for the women's game to be demonstrated,” said commissioner Gary Bettman. “They're excited to be here, we're excited to have them. The fact we can shine a brighter light on the women's game is a positive for them, for the game and for young girls watching and aspiring to do the same thing.”

But it's also unclear if the NHL is willing to go any further in its support.

“We are all hopeful,” Johnston said. “Us being here, I think that's a step in the right direction. The NHL is supporting women's hockey. They're helping us get the exposure that we need.

“The partnership is there. It's not something you can just build over night.”

MCDAVID NOT EXPECTING ANY TKACHUK FIREWORKS

McDavid missed Thursday's all-star media availability, but spoke ahead of the skills competition. Apart from discussing the seriousness of his knee injury - the full details weren't released until a documentary aired Friday - the 23-year-old said he doesn't expect there to be any issues between himself, Edmonton teammate Leon Draisaitl and Calgary forward Matthew Tkachuk as members of the Pacific Division team for Saturday's 3-on-3 tournament. The Oilers and Flames played a heated game two weeks ago where Tkachuk levelled Edmonton winger Zack Kassian with two huge hits. That led Kassian to jump a turtling Tkachuk and earn a two-game suspension. “Whatever is going on it will be settled,” McDavid said. “(But) definitely not at the all-star game.”

PUCK AND PLAYER TRACKING ON TRACK

Bettman said puck and player tracking technology will be ready to go in each of the 16 arenas hosting playoff games this spring, and in all 31 buildings by the start of next season. Tracking is also being used at the all-star game for the second straight year.

Bettman said there's still no decision on the NHL going to the 2022 Olympics in Beijing, but things don't sound promising. While the NHL Players' Association and the International Ice Hockey Federation would like to see it happen, the league views the tournament as a major inconvenience in the middle of its schedule. The NHL went to five Winter Games between 1998 and 2014, but didn't participate in 2018.