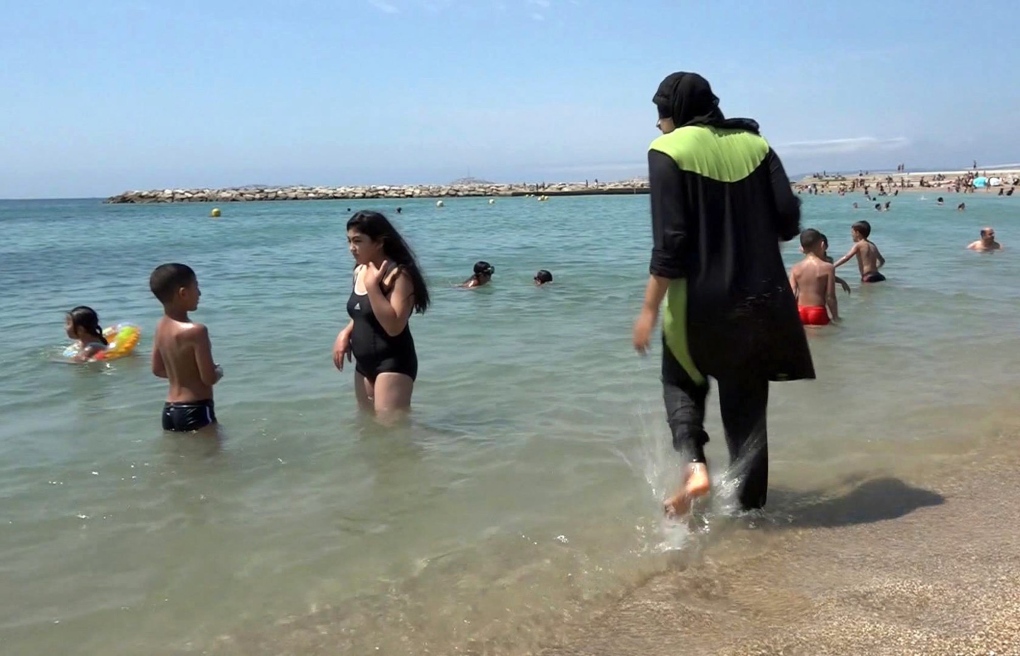 In this Aug.4 2016 file photo made from video, Nissrine Samali, 20, gets into the sea wearing traditional Islamic dress, in Marseille, southern France. (AP Photo, File)

CANNES, France -- The French resort of Cannes has banned full-body, head-covering swimsuits from its beaches, citing security reasons -- a measure some are decrying as a discriminatory anti-Muslim move that only worsens religious tensions.

The ban on so-called burkinis, at the height of the French Riviera's vacation season, comes as France remains on edge after deadly Islamic extremist attacks in nearby Nice and on a Catholic church in northwest France.

Cannes Mayor David Lisnard issued an ordinance in late July forbidding beachwear that doesn't respect "good morals and secularism." It notes that swimwear "manifesting religious affiliation in an ostentatious way, while France and its religious sites are currently the target of terrorist attacks, could create risks of trouble to public order."

A City Hall official said the measure, in effect until the end of August, could apply to burkini-style swimsuits. Violators risk a 38 euro ($42) fine.

The mayor calls the burkini "the uniform of extremist Islamism, not of the Muslim religion." In an interview published Friday in the Nice-Matin newspaper, Lisnard said the measure could also apply to saris worn by Indian bathers, because the clothing could hamper rescuers' efforts to save them in an emergency.

Beachgoers in Cannes had mixed opinions.

"I am from Egypt and I grew up with people like this," said Diana Bishay, who now lives in Paris, referring to women who cover themselves up. "But I am shocked to find this in Cannes ... We have to respect the society we live in."

Delphine Hannouna, of Paris, said that for her burkinis are not "illegal." However, she fears the consequences for women.

"If we accept more and more things, it's like a regression for women," she said, "especially for French women who are very free."

The Cannes beach ban is just the latest of many French measures seen as singling out Islam, the country's No. 2 religion, in the name of official secularism.

Last week, the mayor of a town outside Marseille banned a swimming day for women at a local park, citing a risk to public order because swimmers were required to cover up from chest to knee. The association Smile 13 organized the event for women, girls and boys, asking swimmers respect the Islamic notion of "awra," a reference to parts of the body to be hidden.

The Collective Against Islamophobia in France said it's filing a lawsuit challenging the legality of the Cannes measure. It urged tolerance, noting that Muslims made up about a third of the 85 victims of the July 14 truck attack on the Nice seafront. Two weeks later, after extremists killed a Catholic priest near Rouen, Muslims across France attended Mass in a symbol of solidarity and a denunciation of terrorism.