Check your constituency for the 2019 provincial election 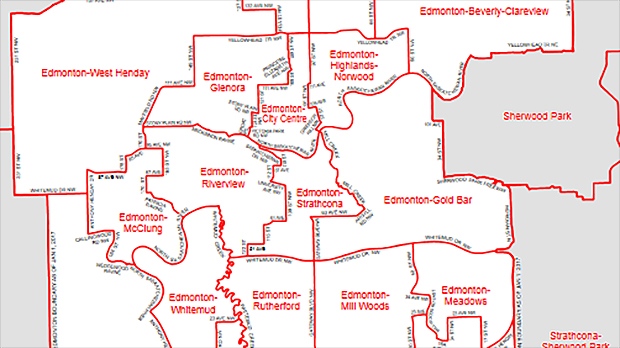 Some Albertans may be voting in a different constituency this year than they did in the last general election, as boundaries have been added, removed and altered across the province.

The city’s biggest boundary change took place in south Edmonton, to accommodate some population growth. The ridings also include extra land that was annexed from Leduc County.

In 2015, two constituencies shared the city’s southern-most boundary at 41 Avenue SW. This year, Edmonton-Ellerslie extends west to 91 Street SW and south to Township Road 510, around Beaumont. The riding that kept the Edmonton-South West name now runs from 215 Street SW and the North Saskatchewan River to 156 Street SW, as far south as Highway 19. In between the two ridings, Edmonton-South was created. Residents in this division include those who live south of Anthony Henday Drive, and in the neighbourhoods between Rabbit Hill Road NW and Whitemud Creek.

Near the city centre, Edmonton-Riverview and Edmonton-Strathcona share a different border between 61 Avenue and Whitemud Drive.

The ridings surrounding Yellowhead Trail between 149 Street NW and 97 Street NW all saw minor changes, including an extension of Edmonton-Glenora further northwest, and Edmonton-City Centre to include the Westwood and Spruce Avenue communities.

Residents north of 153 Avenue, between 127 Street and 97 Street NW have become part of Edmonton-Castle Downs, as have Edmontonians who live between 82 and 66 Streets, north of 167 Avenue.

Edmonton-Decore’s south border was changed to be the Yellowhead Trail.

A committee found communities northeast of Edmonton were not growing as fast the province was, and recommended four electoral divisions of 2015 were consolidated into three.

Athabasca-Barrhead-Westlock extends as far west as Swan Hills and south to the North Saskatchewan River.

The former Vermilion-Lloydminster riding was extended south to include Wainwright.

The area west of Red Deer also saw some consolidation, as recommended by the 2016/17 Electoral Boundaries Commission.

As a result, Spruce Grove was absorbed and renamed as the 82nd district, called Spruce-Grove-Stony Plain.

The new riding northwest of Calgary was named Airdrie-Cochrane.

Southern Alberta lost one riding overall, with the consolidation of seven electoral divisions south and east of Calgary. The 2016/17 Electoral Boundaries Commission saw the population in those areas grew less than Alberta did as a whole.

A full list of the boundary maps can be found here.