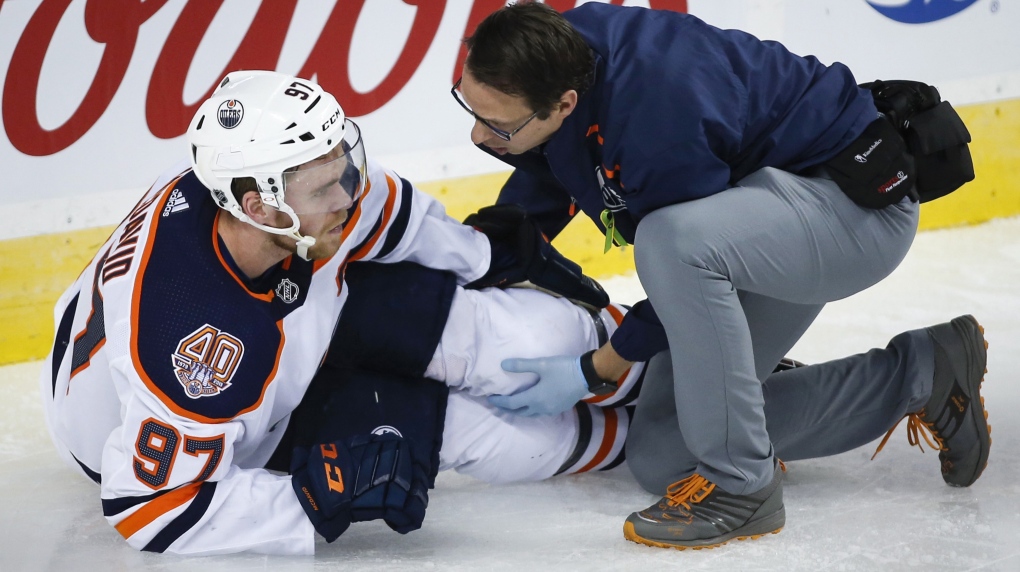 “Connor McDavid: Whatever It Takes,” a documentary that aired Friday night on Sportsnet, showcased McDavid's non-surgical strategy following the injury April 6, 2019, in Calgary.

After an initial examination, McDavid was sent to Colorado for a second opinion. Surgery was recommended, with an estimated recovery time of about a year.

McDavid then made the decision to go to Los Angeles for another consultation, with doctors telling him they felt surgery was too risky for several tears in his knee and a tibial plateau fracture.

McDavid says surgery already was scheduled before he made the call not to go under the knife.

The documentary shows Mark Lindsay, a soft tissue specialist and chiropractor, as one of the leaders of the team guiding the rehab process.

The plan, which the film says lasted 179 days and featured 1,000 hours of rehab, included 40 sessions in a hyperbaric chamber, pool work and exercises on a trampoline and balance beam.

Regular checkups were held to see how the recovery was going, with surgery considered an option if the healing process wasn't satisfactory.

While McDavid originally wasn't supposed to skate until September, Lindsay suggested he should go on the ice earlier in the summer with his father, Brian.

“That was really the pivot point in the whole summer,” Lindsay said. “At that moment, he wasn't injured. He was just out there with his father. He totally changed emotionally that day.”

McDavid was ready for Oilers training camp and then scored the winner in Edmonton's season-opening 3-2 win over the Vancouver Canucks on Oct. 2.

“There's nobody that has done what Connor has done to rehabilitate himself from a serious knee injury in that period of time,” Roberts says in the film.

McDavid said before the skills competition Friday night in St. Louis that he wanted to keep the extent of the injury under wraps during his rehab to avoid “the pressure of the media asking questions.”

“The main focus was getting healthy,” he said.

McDavid also said there were tough days during the rehab process where he questioned if he'd still need surgery.

“There were days when it didn't feel that good going through that process,” he said. “You're like, 'Uh, I wonder what the MRI is going to look like? Should we go back and do the surgery and start over?' But it just kept progressing and progressing and ultimately we didn't have to go through the surgery route.”

McDavid leads the league with 76 points this season. He'll play in the NHL all-star game on Saturday in St. Louis.