Edmonton weather for July 28: Sunny and back to highs near 30 C 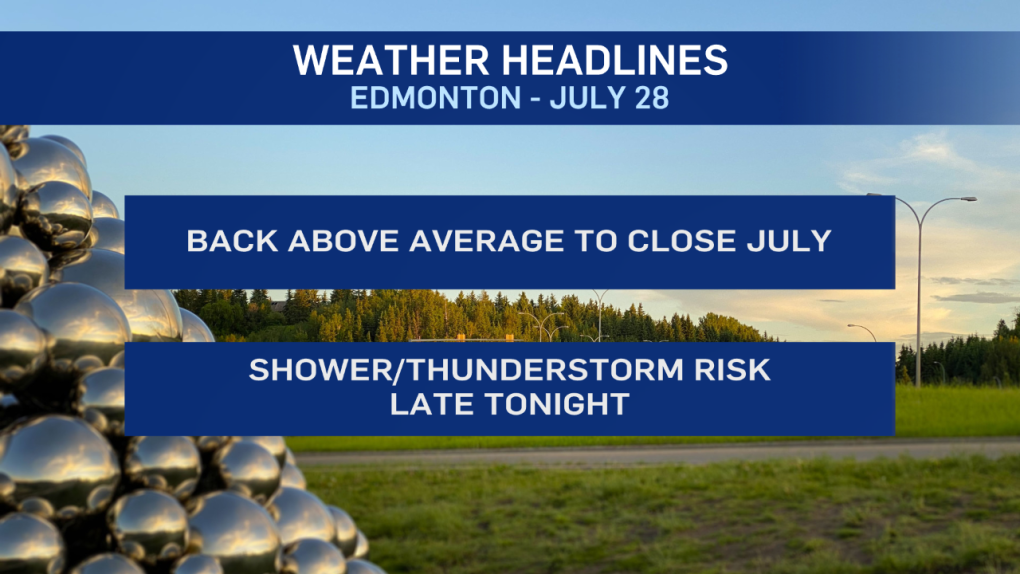 We're set to finish July the way we started it: Hot.

Edmonton had 12 hotter-than-average days in the first two weeks of July.

(Any daytime high within two degrees of the daily average is considered "average".)

Since the 15th, Edmonton has had seven average days and five cooler-than-average days.

But...that changes starting today. A high of 27 or 28 C under sunny skies will push us back into the "above-average" column.

AND...we'll continue to hit hotter-than-average highs each of these last four days of the month (plus the first few days of August).

Sunday's record of 33.3 C (also from 1992) is probably safe, but within the realm of possibility.

We're currently sitting at 12 with the chance to tie or possibly break that record by next week.

The heat will likely linger into Heritage Day Monday with a high near 30 C.

Daytime highs after Monday are expected to drop back into the mid 20s.

Again, those forecast highs all depend on the B.C. wildfire smoke continuing to steer clear of the Edmonton area.

No sign of smoke increasing today or tomorrow. But, forecasting beyond that is tough...so...we'll see how it plays out.

A few showers and thunderstorms will develop in the northern foothills later today.

Those are expected to move east and could push through parts of the Edmonton region late this evening or overnight.

Thursday features a similar overnight shower/thunderstorm risk. But, I think the chances are going to be better for areas south of Edmonton tomorrow night.

Tonight - A few clouds. 30% chance of a shower overnight or early Thursday morning.

Thursday - A few clouds in the morning. Sunny in the afternoon.

30% chance of a shower or thunderstorm overnight or early Friday morning.

Friday - Clouds in the morning. Sunny in the afternoon.