EDMONTON -- A local mother has started a new business selling inclusive and developmental tools to build awareness about children with disabilities.

Edmontonian Meranda Doll started Mindfully Inclusive to help bring tangible aids, inclusive books and activities into the homes of both parents who have children with disabilities and those who do not. The kit is sourced from local moms and items designed specifically by Doll.

So far Doll has created four seasonally themed kits for the year. Each kit is priced at $50 and includes a storybook promoting inclusivity, colouring sheets, tools like emotion wheels, and activities. One of the activities includes yoga cards that have American Sign Language on them to be accessible to any child.

The inspiration for the inclusive boxes came after Doll’s son Vincent, who has a rare genetic disorder, started preschool this year. Doll quickly realized that Vincent was the only child from the entire school who was in a wheelchair.

Doll recognized how she educated herself about children with disabilities and that some of the books or toys she found for Vincent should be available to every parent.

“When you walk into a bookstore or a toy store, you don’t see inclusive toys and toys that feature disabilities right off the hop.”

She wanted to fill that gap and not offer just another website with resources, but a tangible set of items families could use and enjoy together.

A friend helped her create a website and she has been sharing the kits through social media.

She sold out of her preorders a few months ago and has continued selling the inclusivity kits online. Orders have been coming in from Alberta, British Columbia, Manitoba, and beyond.

“It’s been really remarkable how much people want to learn,” Richardson said.

“Because it is a tangible tool kit that comes to your home that you get to open with your kids it is more than just reading something online.”

The first kit is themed around mindfulness. The next kit will be about friendship and will focus on how to develop positive relationships with children who have special needs.

While some of the items within the box can be found online individually, Doll says the kits provide unique value because they have a set of tools and activities that can be used together.

“Many people just don’t know where to start.”

“Before Vincent, we didn’t know where to start. We needed a completely new handbook.

“It opens the door for conversation,” she said.

Doll says she has received positive feedback from parents purchasing the kits. She hopes to develop more kits for families and new ones specifically catered to educators within the year.

Any profits generated by the kits are going to be used by Doll and her family to help fund Vincent’s therapy and future needs, like a ramp outside their home. 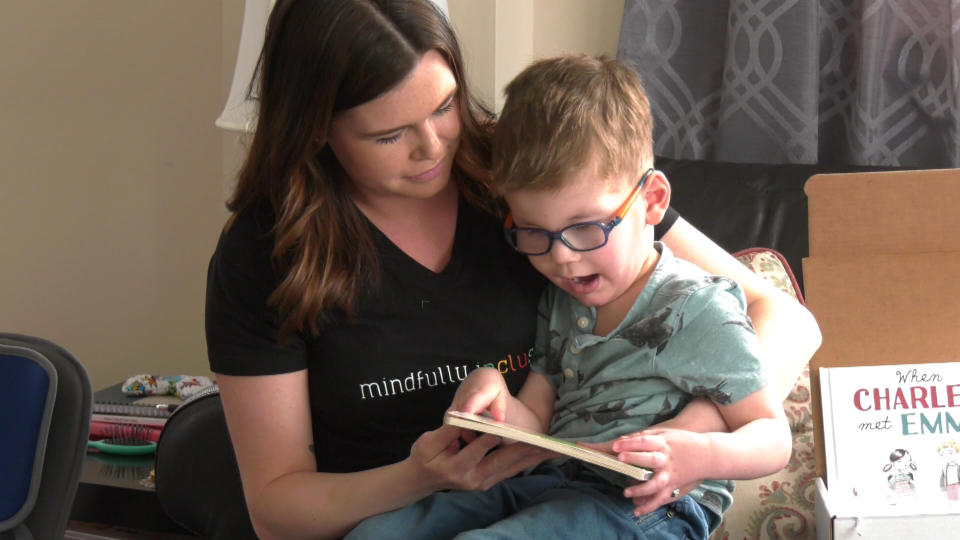 USERS OF THE BOX FIND THE TOOLS VALUABLE

Jodi Richardson, a mother with a six-year-old daughter who uses a wheelchair and a walker, heard about the box through Doll and their support network for mothers with children who have special needs.

“When Meranda told us about it, I jumped on that presale as fast as I could,” Richardson.

“Meranda has put together a toolkit… that is inclusive,” she continued. “This box specifically, showcases children with disabilities to get that normalization and to let kids like my daughter see themselves in books and colouring sheets.”

Richardson added that she has seen herself how much her daughter loves the materials found within the box.

“You don’t often see kids in a wheelchair in a colouring sheet. That’s not in the normal [colouring] book. So it was really special for her to see someone who looked like her.”

KIT HELPS BUILD INCLUSIVITY FOR ALL

“It’s not just for kids with disabilities.

“It’s so important for kids who are neurotypical or without physical disabilities to see differences… and have it part of their baseline.”

Richardson hopes the boxes become more popular and are used in classrooms by teachers.

“My daughter shouldn’t have to teach someone how to be inclusive,” Richardson said. “Boxes like this really open the door for that.”