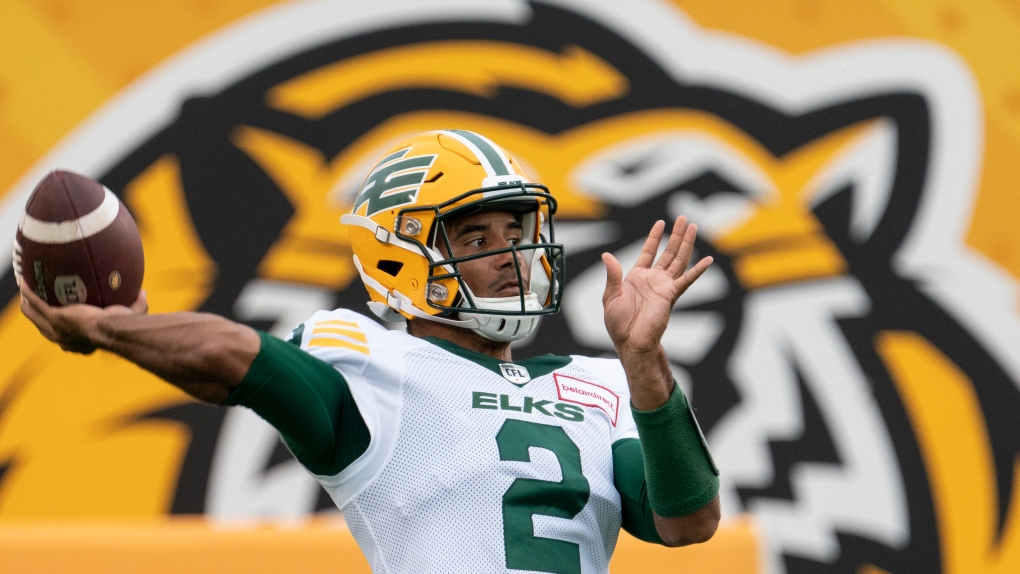 This Thursday, he's expected to make his first start at Commonwealth Stadium, hoping to lead the Elks to their first home win since Oct. 12, 2019.

To put that in perspective, when the Elks last won a home game, Ford was a third-year quarterback for the University of Waterloo.

Nick Arbuckle was removed from the starting role after that game. Ford, a first-round draft pick, did well enough to help the Elks go on the road and beat Hamilton 29-25 on Canada Day.

Ford and Arbuckle were both getting first-team snaps in practice leading up to Thursday’s game, but coach and general manager Chris Jones warned not to read too much into it.

"We always make sure everybody gets prepared," Jones said. "We double-barrel, and guys get multiple snaps with both groups. We’re trying to prepare for the worst of what might happen."

The Elks are carrying four quarterbacks on the roster — Americans Kai Locksley and Taylor Cornelius being the others — making for an unpredictable situation under centre. Going into the season, Jones predicted the battle for the quarterback position would continue through the 2022 campaign.

Ford, who can beat defences with his arm or his legs, is the man of the moment, though. His numbers from the win in Hamilton weren’t mind-blowing — 159 yards through the air, another 61 yards rushing. But the native of Niagara Falls, Ont., did what Arbuckle couldn’t do this season — lead the Elks to a win.

"He's very hard to defend, he's tough in space, and you’re not going to tackle him with one guy," said Jones. "You're going to have to have more than one in order to get him hemmed up. He needs to make the throws that he needs to make, those little basic plays where he’s got to get the ball out of his hand and get it his guys — and let his playmakers go."

Stampeders head coach Dave Dickenson said that Ford isn’t a complete unknown because of his high stock in the draft.

"We're familiar with him because we've worked hard on the draft process," Dickenson said. “I think he's young, but he's confident. I think he enjoys the game. We’ve just got to make sure that we’re tight on our details. He’ll make his plays. He can throw, he can run."

Arbuckle was complimentary of the quarterback who took his job, at least for now.

Despite Ford’s athleticism, don’t expect the Elks to add a lot of razzle-dazzle to the playbook for Thursday’s game. Ford is still fresh out of his U Sports career at Waterloo, and Jones promised he won’t overwhelm his team, which is a work in progress, with a complex game plan.

"I think it’s a matter of keeping it simple for now, letting me learn and becoming a master of what we have." Ford said. "Then, trying to develop it, making it more complicated from there, making it harder for defences to cover — and getting in there and putting in some special plays where I can use my legs."

While the Elks will likely keep things simple, look for the Stamps to introduce defensive looks meant to confuse the rookie quarterback. The Stamps only allowed 290 yards of offence to the Elks when the teams met in Week 3, and they present a much tougher challenge to Ford than the winless Ticats.

“Young quarterbacks, we want to give them multiple looks,” said Dickenson. “That’s what we’re going to try and do.”

Ford was a high draft pick, but the idea of a Canadian university quarterback coming into the CFL and getting a starting job so soon is novel. A rookie quarterback out of American college wouldn’t be expected to be given so much responsibility either.

"U Sports quarterbacks don’t go into (the CFL) and start by Week 4,” Ford said. “I was not expecting that. But, at the same time, I’m always ready to go.”

This report by The Canadian Press was first published July 6, 2022.