EDMONTON -- The convergence of people protesting everything from Alberta's COVID-19 restrictions and the imprisonment of a local church pastor, to racism, at the provincial legislature on Saturday was a tense meeting that ended with at least one person in police custody.

The crowds began to gather around 2 p.m. when an anti-racism rally was scheduled to take place.

Within hours, a group called Walk for Freedom protesting COVID-19 public health measures had marched to the government grounds, those at the front carrying a banner that read "protecting our civil liberties" and burning torches. 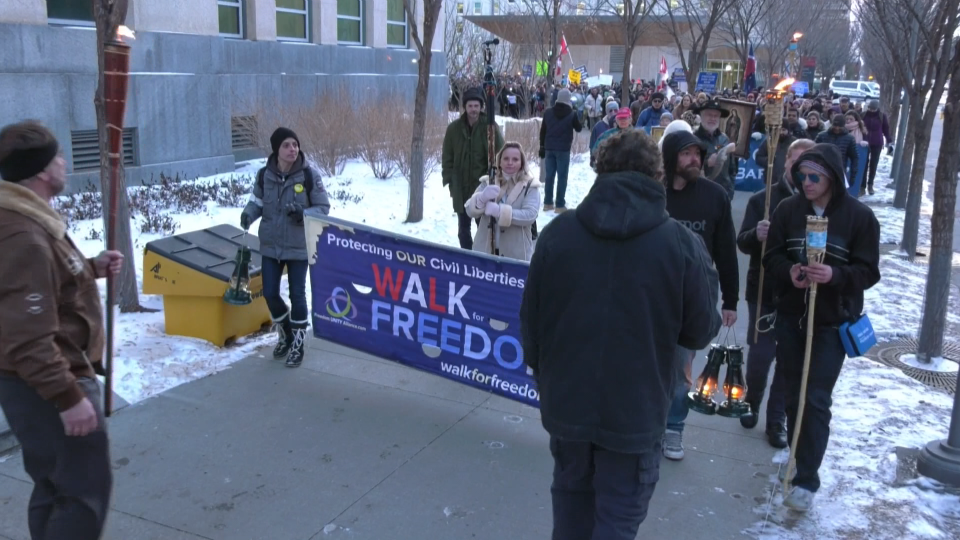 Some of their signs read "Stop the lockdown," "Open all businesses, Kenney!" and "Alberta PCR tests give false positives!!!"

Alberta Sheriffs and Edmonton police both attended the scene, the latter helping to keep the two sides separate. 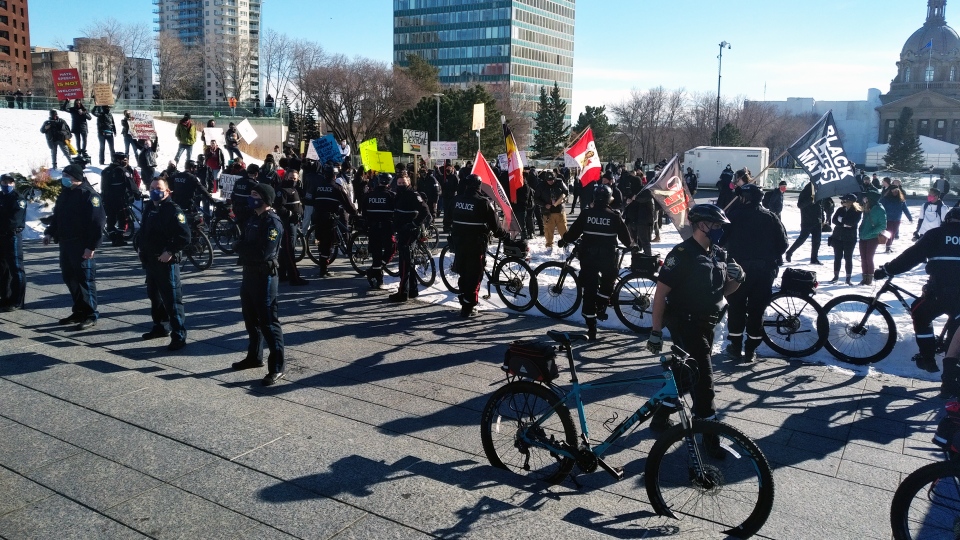 However, one man was arrested – for causing a disturbance, according to EPS – to the dismay of his supporters. 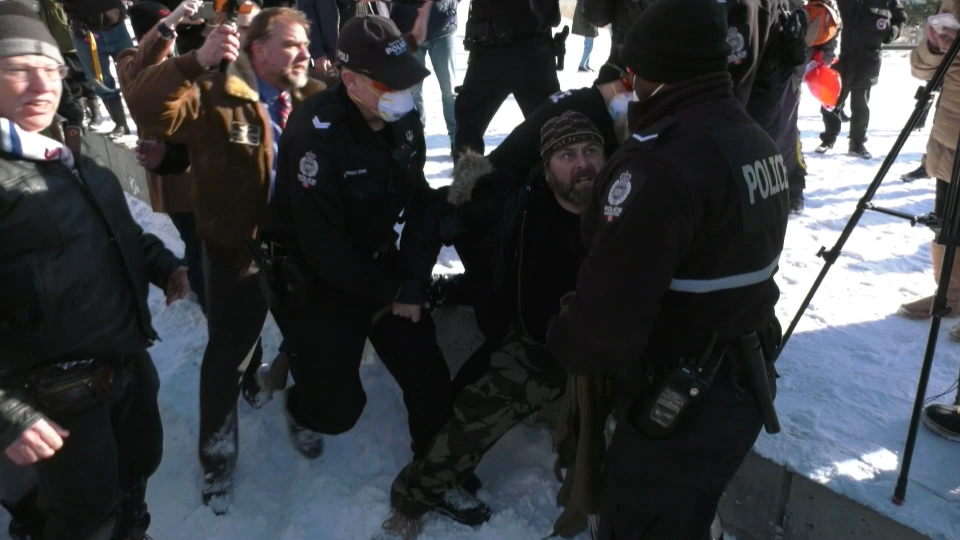 "Nazis. That's what you people are," an onlooker shouted at the officers.

The man was not charged and released later. 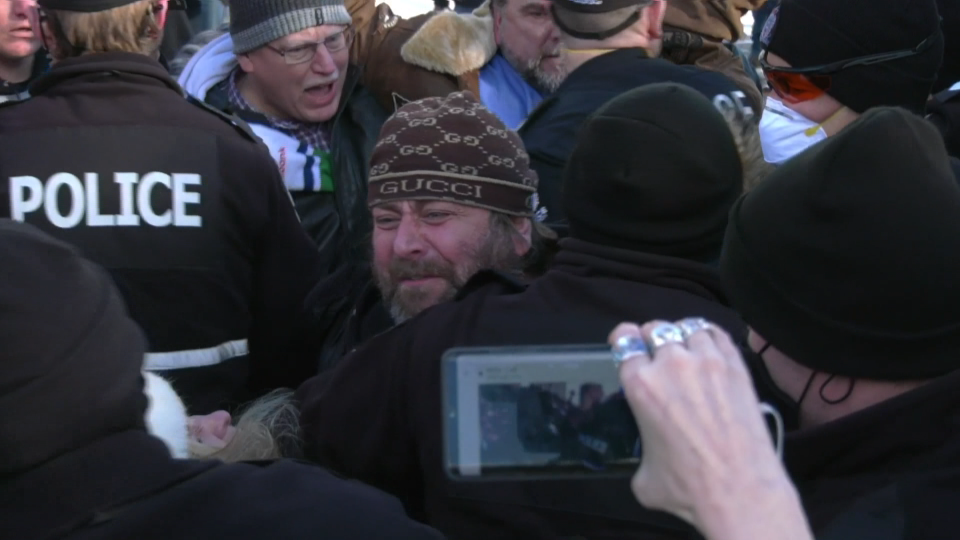 The president of the Edmonton Police Association told CTV News Edmonton four officers were assaulted at the event. According to EPS, no charges were being laid.

Mike Elliott said none of the officers were injured and all will be back at work. The file remains open as video footage of the incident is reviewed.

"A couple times it got pretty dynamic and the members are trying to do the best they can to keep things deescalated," he commented.

According to Elliott, between the increase in rally events and pandemic-related stress, the morale among officers is low.

"It feels like the members, no matter what they do, they are judged on they either didn't do enough, or do too little," he commented.

It would have been Alberta Sheriff' responsibility to issue any public health order-related tickets.

When asked if there would be any enforcement of the public health measures at the rallies, Alberta Health Services directed CTV News Edmonton to its demonstration event guidelines, which the agency said are "meant to balance the rights of expression with the need to keep communities safe and prevent the spread of COVID-19."

As of Sunday afternoon, Alberta Premier Jason Kenney had not publicly commented on the Saturday events at the legislature, nor had his office responded to CTV News Edmonton's ask for an interview.

However, Official Opposition and NDP Leader Rachel Notley called COVID-19-restriction opposition a "guise" for white nationalism, saying, "We must confront that threat."

And former Liberal minister and MP Amarjeet Sohi said, "Torches invoke racism, violence & destruction. Those carrying them in #yeg today symbolize hate. Freedom is a façade for their evil. And complacency from those in power is a choice."

Torches have been used throughout history by racist and white supremacist groups, including Nazi Germany, the Ku Klux Klan and, more recently, demonstrators at the white nationalist rally in Charlottesville in 2017.

"When you have people who are coming together bringing symbols of hate -- these Tiki torches on a daytime, warm day rally -- you know that's not what they're there to discuss," Ward 1 Coun. Andrew Knack told CTV News Edmonton on Sunday.

"That's not the message that they're trying to send, which is that they want to have a respectful conversation about what the right public health actions that we take as a society are. That's not a conversation that folks were trying to have yesterday." 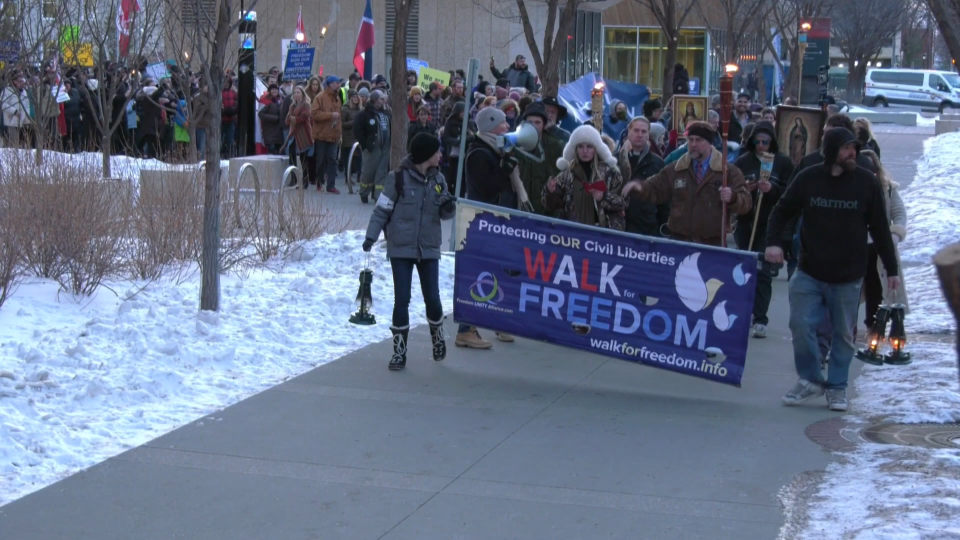 While Knack could not say specifically what action he wanted to see taken by authorities after the event, he believes it's important for there to be consequences for those who are considered to be endangering public health.

"It does get frustrating, just as an Edmontonian, watching week after week after week of people blatantly breaking the public health orders when every day more Albertans are dying."

The city centre's MLA, NDP's David Shepherd, said he was immediately reminded of the 2017 Charlottesville riots when he saw the burning torches on Saturday.

He called on more community and provincial leaders to say publicly the behaviour was not OK.

"To see them parading that through the heart of our city is just -- it's heartbreaking and it's anger inducing. It just makes me recognize how much work we have more to do and how essential it is that we as public leaders speak out against it. Make it clear that this is not acceptable," he said.

"Another thing that would be incredibly helpful is if we saw and hear direct condemnation from our premier and from our government."

Many of the anti-lockdown speakers voiced support for Pastor James Coates of GraceLife Church near Edmonton, who was arrested earlier in the week when the church continued to hold Sunday services that police allege violated COVID-19 restrictions.

Prior to the demonstration, supporters said prayers outside the Edmonton Remand Centre where Coates has been remanded in custody for refusing to agree to bail conditions.

A sign carried by one demonstrator said “Free the Preacher, Jail the Premier.”