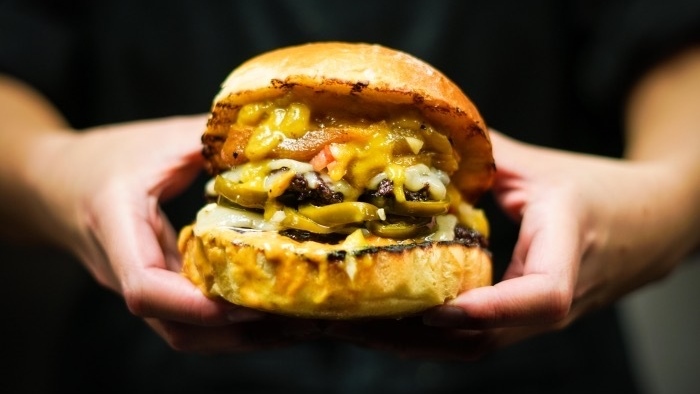 A new pop-up restaurant in Edmonton has diners vote to keep their favourite Nintendo-themed burgers on the menu. (Provided Image)

EDMONTON -- A new pop-up burger joint with a Nintendo-themed gimmick seems to be taking off in Edmonton.

As a new round of provincial restrictions saw the dine-in experience shutdown back in December, two culinary artists were launching a gourmet burger kitchen out of downtown's DOSC Restaurant.

Burger Brawl's head chef Karl MacKinnon and sous-chef Shariff Rajpar have 84 gourmet burger concepts in the works – each one with a name inspired by a different character from the Nintendo video game series Super Smash Bros.

It’s a competitive fighting game that features classic video game characters like Mario and Sonic battling one another. The idea for Burger Brawl is somewhat similar.

"It was a bit by accident," MacKinnon told CTV News Edmonton. "Shariff made a burger, I absolutely loved it, but I'm competitive so I cooked my own burger as well to kind of see what people perceived as the best burger."

The two culinary specialists went from there - pitting their first Burger Brawl burgers, named Mario and Luigi, against each other to let the public decide its favourite.

"It kind of just sky-rocketed from there," said MacKinnon.

Now every week the takeout and delivery restaurant has six burgers to choose from - and vote on.

"Whichever burger gets the most votes wins," Burger Brawl's head chef said. "The lowest voted burger gets knocked off, we bring in a new contender."

The burger joint's Instagram page hosts each week's vote and regularly features teases for the unveiling of new creations. New burgers are revealed on Thursdays.

"It's meant to be a lighthearted, interactive burger joint," said MacKinnon.

The head chef says so far the reception of the Burger Brawl concept has been "unreal."

"We're having people on Instagram that we don't even know supporting us," MacKinnon said. "It's been quite remarkable to see how many people have kind of jumped onto this concept so quickly."

Rajpar and MacKinnon chose the Smash Bros. series for inspiration as a play on words. Their burgers are prepared using smash patties, a pressed down patty that's crispy and quite thin.

"Everything's in-house. You know, we take pride in that," said MacKinnon. "Shariff and I are making every condiment, every smash patty. We're even curing our own meats."

The two burger experts say they hope to move their Burger Brawl concept out of the DOSC kitchen someday and into its own venue.

"The hope for it is that we create more momentum for it," Rajpar told CTV News Edmonton.

For now, if you want your Burger Brawl fix you'll have to wait through the weekdays. The Nintendo-themed burgers are only available for order Fridays and Saturdays from 4:00 p.m. to 9:00 p.m.

"(The hours) kind of create a little bit of hype, so it's something to look forward to toward the weekend," said Rajpar.

"People want what they can't have," added MacKinnon. "So having those limited hours makes it so me and Shariff, we're non-stop pounding out burgers for 10 hours a week."