EDMONTON -- Local CN Rail employees were on the picket line Tuesday, joining thousands across Canada who are now on strike.

Approximately 3,200 conductors, train personnel and yard workers walked off the job at midnight.

The Teamsters Canada Rail Conference, the union representing the employees, says CN has been unwilling to address workers' health and safety issues.

The strike comes just days after the company announced it will be cutting management and union jobs because North America's economy is getting weaker.

The two sides have been without a contract since July.

Alberta is calling on the federal government to address the labour action by recalling parliament and enacting emergency back-to-work legislation.

"CN Rail regularly ships in excess of 170,000 barrels of Western Canadian oil per day. Any disruption in shipments would have serious consequences for an economy that is already dealing with severe bottlenecks due to cancelled and delayed pipelines," Minister of Energy Sonya Savage said in a written release. "Alberta cannot see further restrictions on our ability to export our product."

The UCP eased the oil curtailment rules in October, allowing special allowances for increased production if the additional oil is moved by rail. 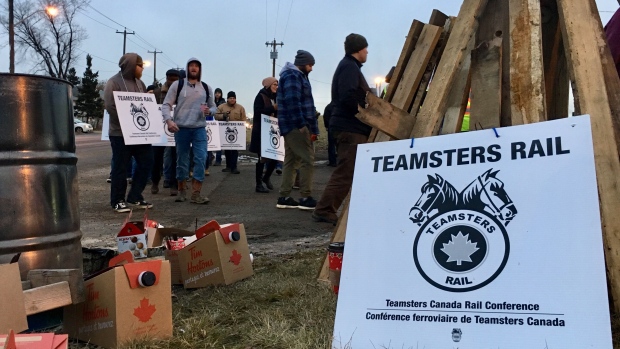