Wildlife photographer Tim Osborne was one of several Edmontonians who saw lynx loitering at the Alberta legislature on Monday.

"I think it was disbelief," Osborne told CTV News Edmonton the next day. 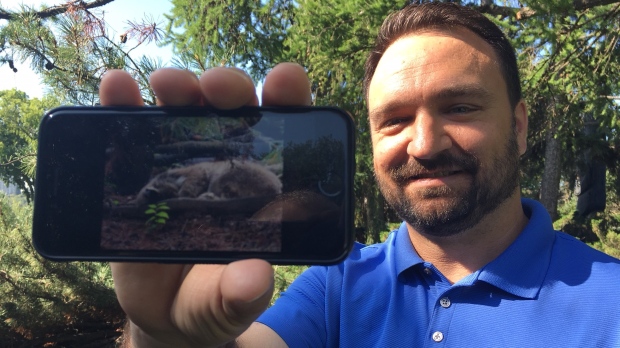 "A lynx is a kind of animal you dream of seeing one day, if you're lucky, in the mountains, or you know walking through the forest. But never in a million years did I imagine I'd get to see one right here in the city."

He added it was unexpected, "to say the least," to come across the animal while on a lunch-time walk.

“My first thought as a wildlife photographer is, 'I can’t believe I’m seeing a lynx and I don’t have my camera wth me,” he recalled.

“You certainly don’t want to walk up to a sleeping lynx with your iPhone and get a photo.”

Good camera or not, Osborne managed to snap a couple shots of the lynx sleeping underneath a tree.

A government spokesperson said wildlife officers helped Alberta Sheriffs direct the lynx from the legislature grounds to the river valley.

"Lynx are not typically a threat to people, but wild animals should never be cornered. Pets should also be kept on leash at all times," Lisa Glover advised.

"Lynx are quite shy animals and will usually retreat back into the bush or shrubs when people are around."

Officials believe the animal likely wandered in because of the jackrabbit and hare populations.