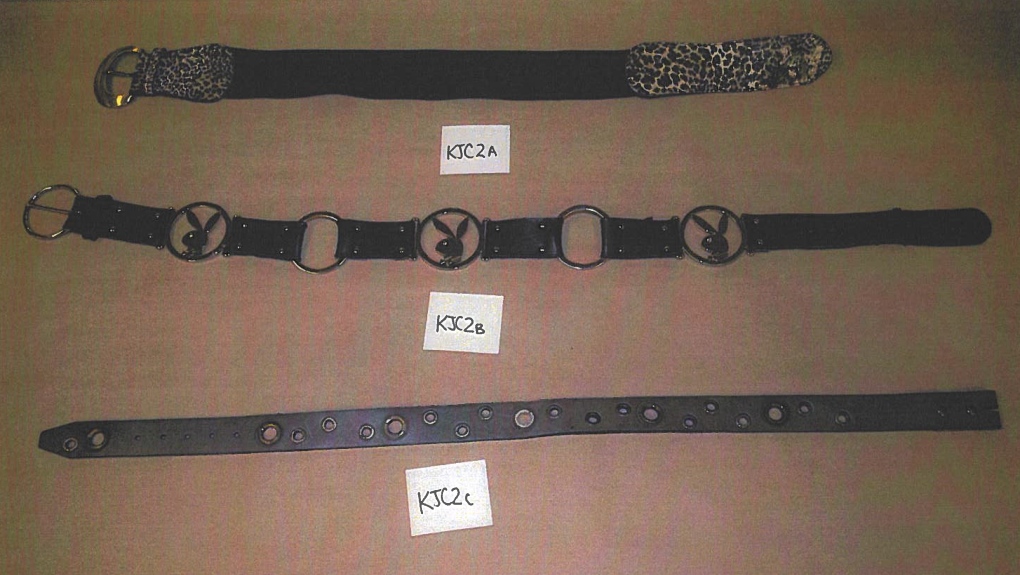 A forensic photograph taken in October, 2015, of belts was filed as an exhibit for the trial of Lauren Lafleche, an Edmonton woman accused of killing her five-year-old daughter. The victim’s younger brother said in court Monday Lafleche regularly beat her children with a belt as a form of punishment. THE CANADIAN PRESS/HO-Court of Queen’s Bench Alberta

EDMONTON -- Five-year-old Shalaina Arcand's small body was deeply bruised, most likely because of inflicted trauma, an Edmonton judge heard on the second day of her mother's murder trial.

Lauren Lafleche has pleaded not guilty to second-degree murder, failure to provide the necessaries of life and assault with weapons that included a belt and a spatula.

The judge-alone trial has heard that the mother called 911 one night in October 2015 to report that one of her three children was breathing but wouldn't wake up.

An ambulance arrived at a two-bedroom apartment in northwest Edmonton. Shalaina died a few days later in hospital.

Pathologist Mitchell Weinberg testified Tuesday that Shalaina arrived at the hospital with hemorrhages that were widespread in her brain. He described them as recent injuries.

The trial heard that Lafleche, 29, said in a witness statement that her daughter may have fallen off a bed or been injured while playing at a park a few days before she died.

Weinberg said that's not what he thinks happened.

“It is my best professional opinion as a forensic pathologist that the injuries are not explained by the accidental scenarios that were presented to me, and that the nature of her injury is best explained as being inflicted in nature.”

An autopsy determined the girl died from blunt force trauma to her head.

Weinberg also testified that Shalaina had a damaged kidney, a cut under her upper lip and bruises on her cheeks, on the back of head, near her ear and on her elbows.

“The nature of her injuries, the distribution - there is a wide range of ages to her injuries that are slightly concerning as inflicted trauma, and those additional findings do factor into the overall conclusions and opinion about Ms. Arcand's manner of death,” Weinberg said.

The trial earlier heard from Shalaina's two siblings who lived in the home. They said everyone was hit regularly with a belt as a form of punishment, but Shalaina was beaten the most.

The brother and sister, who were four and 10 at the time of the death, said they also hit Shalaina with a belt because she cried every night. And they said Shalaina slept on the floor of a closet while they had nice clean beds.

The sister also testified that the night Shalaina was taken to hospital, their mother woke her up to help give Shalaina a bath and wash her face before the woman called 911.

Crown prosecutor Laurie Trahan showed the trial judge images of bloodied pyjamas and other clothes that belonged to Shalaina.

The trial is scheduled for 15 days.

This report by The Canadian Press was first published Nov. 17, 2020.