EDMONTON -- His actions—and his shirt—spoke louder than his words, and now the mystery man hailed as a hero for chasing down an arsonist on a busy Edmonton street in April has been identified.

Whiting says Bert was enjoying a dinner on Whyte Avenue on April 12 when a man dressed in all black walked down the avenue pouring gas on several vehicles and lighting them on fire as seen in witness video.

He was one of two bystanders who intervened and stopped the man from running away. Police later showed up to arrest him.

Social media erupted with compliments for Bert, dubbed the "Hawaiian shirt guy" due to his colourful duds.

"A lot of us around here… in Lloydminster have known who it's been and who that was ever since it happened, but knowing Bert, it's not his style," Whiting told CTV News Edmonton. "It's not his style to go and take the public accolades or anything like that, he just wanted to lay low and let it die down a bit."

He added that Bert and his wife have watched all the coverage since and are appreciative of the kind words, but he didn't do it for a pat on the back.

"I think it's just a testament of his character. It was an issue, it was a danger to others, and Bert, he's a bigger guy, he has an ability to rectify the situation like that just given his size and his attitude," said Whiting. "He went into action before [his wife] even noticed."

Bert and his wife agreed to have their photos taken to help commemorate the event, but they don't want to comment publicly about that night.

"Bert and I are both humbled and honoured that you feel this story is still newsworthy," Glenys wrote in an email. "We recognized that this would give up our anonymity but would like to keep our privacy."

The man arrested in the Whyte Avenue arsons, 23-year-old Malice Sutton, pleaded guilty to the charges against him and is expected to be sentenced Nov. 8. 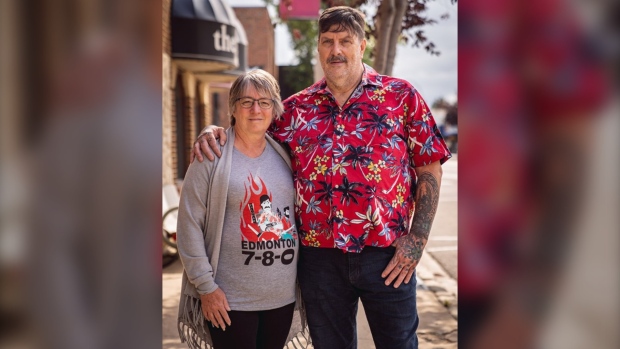