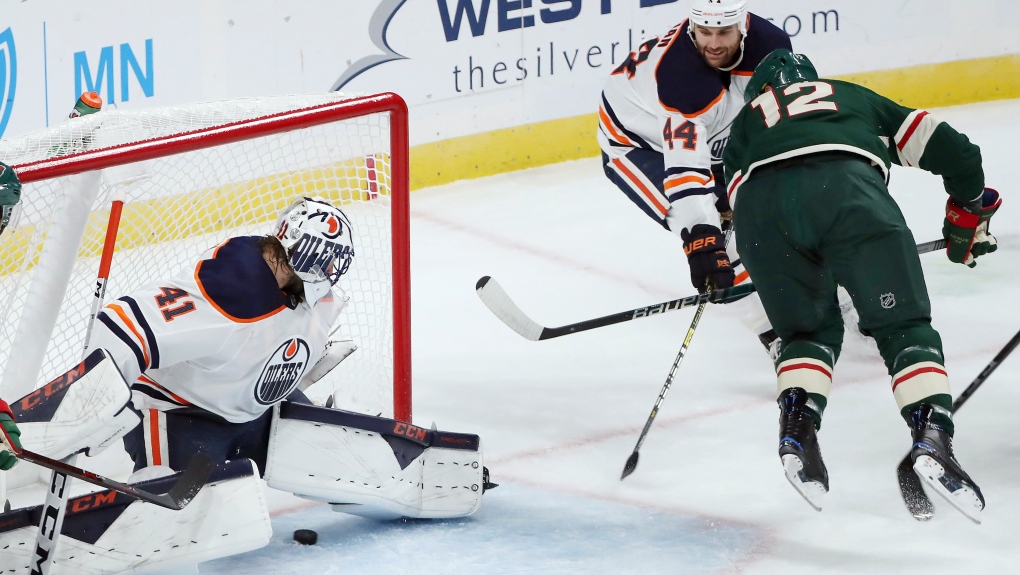 For the second straight game the Oilers were unable to find the back of the net, falling 3-0 to the Minnesota Wild and losing back to back games for the first time this season.

“We’ve had a pretty good start,” Oilers head coach Dave Tippett told reporters after the game, “but when you play a desperate team you better play desperate yourself.”

Edmonton may be off to a hot start this season, but they’ve been ice cold when playing in the central time zone. All three of the Oilers losses have come on the road against Central Time teams, getting outscored 7-1 in those three games.

Coming off a 4-3 win at home against the Montreal Canadiens on Sunday, Minnesota had not won back to back games before tonight, and Wild Forward Eric Stall was yet to score his first goal.

That changed 11:33 into the first period.

After taking a pass behind the net from Mats Zuccarello, Jordan Greenway drew Darnell Nurse and Brandon Manning while circling the around the net, setting up a wide-open Stall in front. He stuffed the back hander past Mike Smith for his first of the season, and a 1-0 lead for Minnesota.

Stall struck again just 1:15 later, chasing down a blocked Carson Soucy point shot and again using the backhand to beat Smith for his second of the game and putting the Wild up 2-0. Greenway also picked up an assist on the play but was hit hard along the boards by Josh Archibald while setting up Soucy for the one-timer. The hit sent a shaken Greenway to the dressing room, but he later returned.

Minnesota would add another before the end of the period when just five seconds after Oscar Klefbom was called for a holding penalty, Edmonton gave up their first powerplay goal on the road this season when former Oiler Brad Hunt buried his team-leading fourth goal from the point to give Minnesota 3-0 lead.

The Oilers had a chance to get back in the game early in the second when Ryan Donato hauled down Manning on his way to the Minnesota net, taking down Wild goalie Devan Dubnyk who appeared to hit his head against the ice. He left the game and the Oilers got their first powerplay opportunity against a cold Alex Stalock who stepped in to replace Dubnyk. However, the Oil’s tied for league-best powerplay went 0-2 on the night, while Dubnyk and Stalock combined for the 25 save shutout. The Wild defence chipped in with six blocked shots on the night.

After allowing the three goals in the first, Smith settled down for the rest of the game, making 27 saves, but the Oilers offence was not able to bail him out. Smith has been in net for all three Edmonton losses.

“First time losing two in a row and first real game where I thought we probably got outcompeted most of the game.” Oilers forward Ryan Nugent-Hopkins said after the game.

While the Oilers top guns were silenced for a second straight night, Riley Sheahan highlighted the need for contributions from other players in the lineup yet to find their way on the scoresheet when talking to reporters after the game.

“We need to give our top guys some relief,” the pointless forward said, “I don’t know exactly what we do, maybe we take the puck to the net a little more, get the puck to the point and try to get some dirty goals, stuff like that, but we really need to help out.”

The Oilers return home to play the Metropolitan Division leading Washington Capitals on Thursday who lead the league in goals with 41 over 11 games.