'Our team is good': Unbeaten Canadians aren't worried ahead of Finland match

'Our team is good': Unbeaten Canadians aren't worried ahead of Finland match 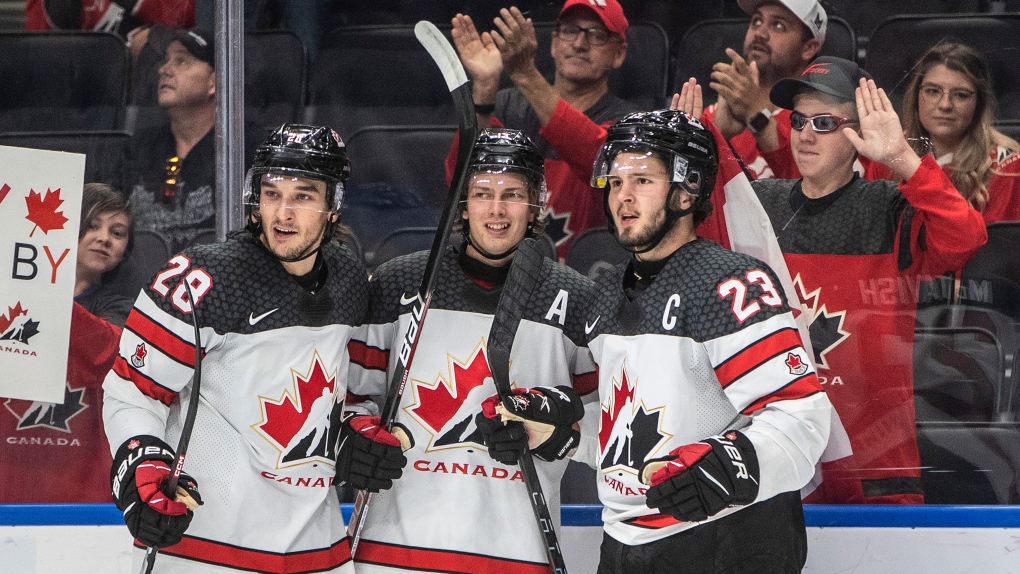 So far, it has been almost too easy for the Canadian junior team.

As the squad prepares to face Finland on Monday in a game that will decide who finishes atop Group A at the world junior hockey championship, the host's biggest enemy might just be complacency.

So far, it's been a walk in the park for the Canadian juniors. They've swept aside Latvia, Slovakia and Czechia by an aggregate score of 21-4. And, in those two wins, there were two standout performances in goal, from Latvia's Patriks Berzins and Czechia's Tomas Suchanek.

Over the three wins, they've outshot their opponents 145-70.

“Obviously, the shots were very high for us in both games,” defenceman Olen Zellweger said about the Canadian wins over Slovakia and Czechia.

“That's very good for us. I guess if you would have said that I'd be shocked (by the size of wins), I guess I would have been a little bit. But our team is good and that's our goal -- shoot the puck, retrieve it and keep creating that offence.”

The Finns have won all three of their group games -- though the Finns needed a shootout to dispatch the Czechs. They trounced Slovakia 9-3 Sunday afternoon just as Canada was getting ready to jump on the ice at the neighbouring practice rink -- so the Canadians only caught fleeting glimpses of that Finnish triumph.

But the Canadians know they have to work on some details. The Finns scored five power-play goals in the win over the Slovaks. New York Islanders prospect Aatu Raty has eight points in three games, while Nashville Predators draft pick Joakim Kemell has seven.

“Your can nitpick a lot, but we're also doing a lot of good things,” said Canadian forward Mason McTavish, who leads the tournament with 10 points in three games. “We're just focusing on correcting some mistakes.”

McTavish said one area of focus is puck movement on the power play, to make things “simpler” and to move the puck faster. If there was one dour moment for the Canadians in the win over the Czechs, it was a first-period five-minute power-play that generated very little and allowed a short-handed goal.

Canadian forward Kent Johnson, who scored a jaw-dropping lacrosse-style wraparound goal in Saturday's win over the Czechs, said he isn't worried that the Canadians will be fooled by their own success so far.

“I think, a lot of times, when you're winning like that, you could get complacent, but that's a battle in life that I think a lot of us have dealt with a lot,” he said. “I'm not too worried about it.”

Remember that kids who get to this level dominated games in minor hockey. They were in their own stratospheres when they played on community rinks. So, from a young age, they had to push themselves even though they were at higher levels than anyone else around them.

“Every player on this team, every member of the staff, they're here for a reason,” said Johnson. “I don't think we're the kind of people with personalities who are (easily) satisfied.”

For Zellweger, it's about making sure he and his teammates don't lose sight of the bigger picture.

“I think we have to keep our goals in mind,” he said. “We're here for the gold medal, and that's what we have to keep in mind. When we're preparing through practice, preparing for our games, that has to be our mindset.”

Zellweger said it was good for the Canadians to get some practice time in, as many of the sessions have been cancelled because of the heavy game schedule. Balancing rest and three games in four days has meant there hasn't been a lot of time to fine-tune the Canadian game, not that it looks like it's needed a lot of it.

Zellweger said the Canadians know the dangers the Finns bring with their game.

“I think it's their speed and their structure,” he said. “They pounce on mistakes, so we have to be ready to play a strong two-way game.”

This report by The Canadian Press was first published Aug. 14, 2022.