Produce for the people: Affordable rec centre market could grow in Edmonton 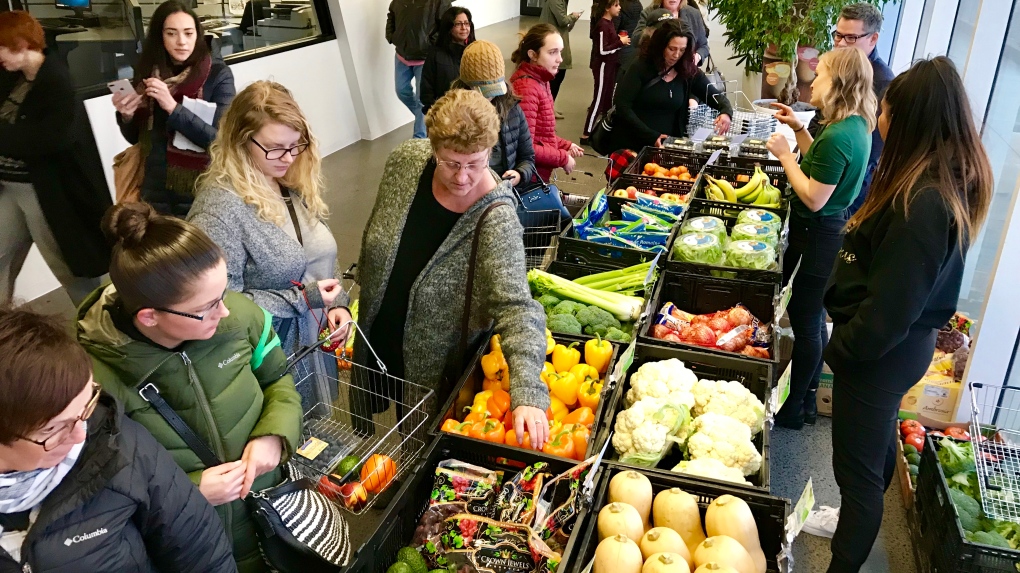 Edmonton -- Anita Courtoreille has kids to feed on a limited budget so an opportunity to save as much as 60 per cent on her grocery bill was worth lining up for.

“It means a lot. I’m on AISH (Assured Income for the Severely Handicapped),” Courtoreille told CTV News Edmonton.  “I don’t get that much for food after my rent and everything comes out.”

Courtoreille was one of dozens who bought discounted produce Wednesday evening, as the “Fresh Routes Mobile Grocery Store” pilot project was launched at the Clareview Rec Centre.

Paquette said he started working on the project about a year ago, after seeing it in other cities.

The Ward 4 councillor then partnered with the University of Alberta, City of Edmonton and the Leftovers Foundation to make it a reality.

“Produced fast-foods are economically advantageous to individuals on a fixed income. Fresh produce, we know if extremely expensive,” said Maria Mayan from the University of Alberta.

Mayan said a recent project at the U of A found an alarming stat concerning local immigrant and refugee families, in particular.

“We found that a third of their kids were going to school, and going a full day without eating,” Mayan said.

The market is open to everyone, regardless of income

The goal, Mayan said, is to eventually have 60 markets across Edmonton, like Calgary has.

With approximately 22,000 AISH recipients in Edmonton, Courtoreille said the need for Fresh Routes is there.

“The price of food went up so much and they don’t give you no extra for it. So you’re stuck looking for resources,” she said.

More information about the program and a full list of partners can be found here.