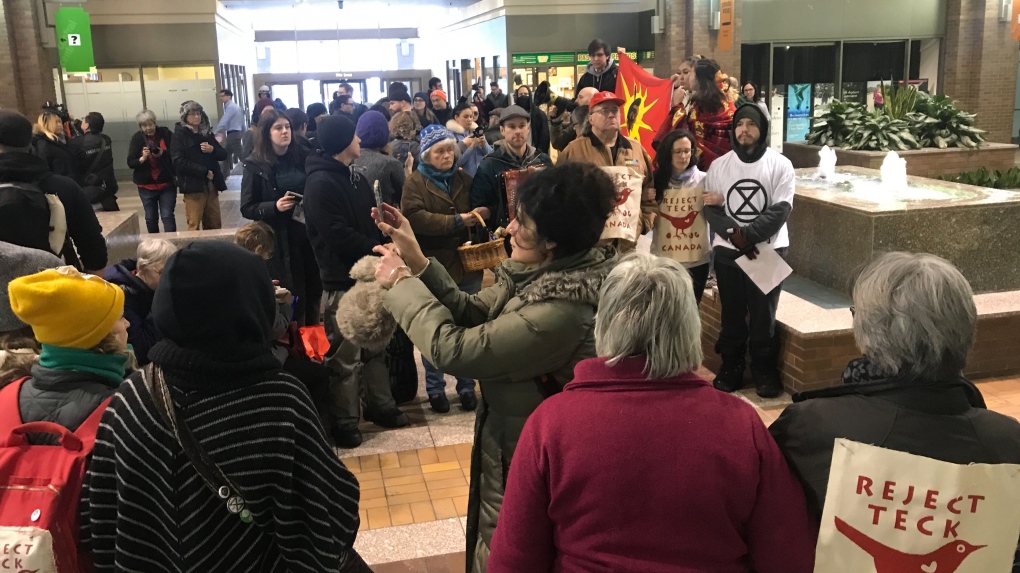 Groups against the proposed Frontier Mine in Northern Alberta held a protest inside Canada Place.

EDMONTON -- Organizations against the proposed Teck Frontier Mine held a protest inside Canada Place in downtown Edmonton over the noon hour on Wednesday.

It's one of several being held across the country in an effort to get the federal Environment Minister to reject the project.

The Frontier Mine, proposed by Vancouver-based company Teck Resources Ltd., would be located approximately 110 kilometres north of Fort McMurray. If approved, it would be the largest open-pit oil sands mine of its kind in Northern Alberta.

The project includes the construction, operation and reclamation of an oil sands surface mine with a production capacity of about 260,000 barrels of bitumen per day.

Members of Beaver Hills Warriors and Extinction Rebellion Edmonton want the project turned down based on findings in the 2019 Joint Review Panel.

The group worries the mine will hurt the economy and eco-systems.

"Communities downstream of the project are already experiencing degraded ability to use their traditional lands and territories as a result of tar sands extraction over the last 60 years," the groups said in a news release.

They said the mine would be about 17 kilometres from the Indigenous settlement of Poplar Point and within traditional hunting and fishing grounds used by several Indigenous communities.

The group said a decision on the mine, initially expected on February 20, has been delayed.