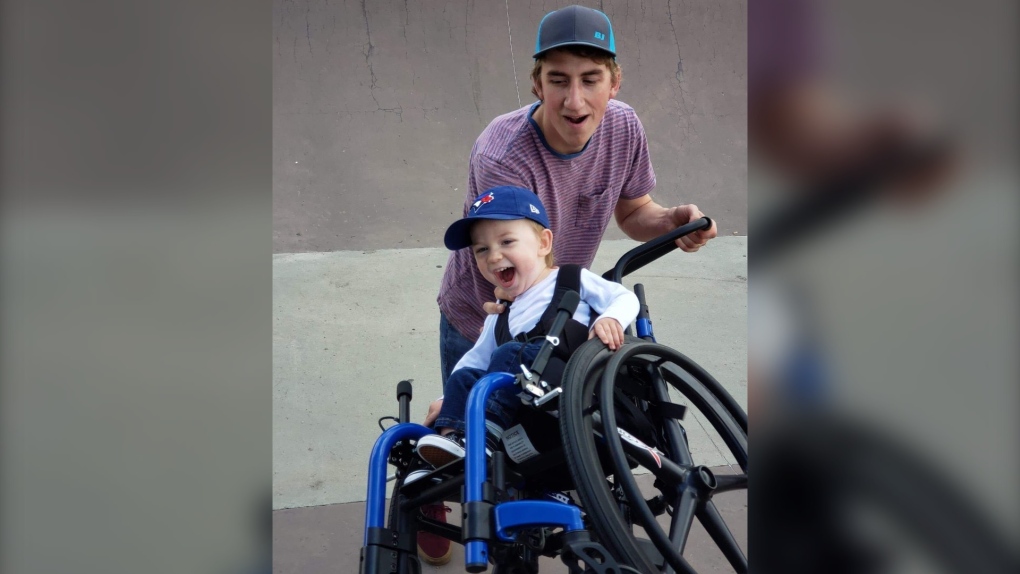 The parents of Mason Seward, a three-year-old boy with Spinal Muscular Atrophy Type 1, started a fundraiser to buy him a new wheelchair. Oct. 7, 2020. (Supplied)

RED DEER -- The parents of a three-year-old boy with a neuromuscular disorder in Red Deer started a GoFundMe to buy him a new wheelchair.

Mason Seward was diagnosed with Spinal Muscular Atrophy Type 1 — a disorder that results in muscle weakness due to lower motor neurons in the spinal cord and brain stem — when he was three months old.

Doctors told Mason’s parents, Madison and Blake Seward, that 90 per cent of babies with the disorder don't make it past the age of two.

“It was absolutely devastating,” said Madison.

However, Mason recently turned three years old and his symptoms are improving. He was part of a clinical trial for a gene therapy treatment called Zolgensma, which is used to treat spinal muscular atrophy.

He's now able to use his hands and arms a bit more, as well as stand for a few seconds with support.

“Before he got his treatment, he wasn’t able to hold his head or even move his left leg. His body had deteriorated so much,” said Blake.

“We really don’t know what the future looks like, but he has been getting stronger every single day.”

Now Madison and Blake are hoping to raise enough money to buy Mason a new all-terrain wheelchair called an Action Trackchair, which would make it easier for him to traverse through different environments.

“Mason is an adventurer, so we took him to a plot of land and realized that he really couldn’t get around. The wheelchair that he has just works on flat ground, so we found this chair that will help him get around in the dirt, uphill, through sand, grass, everywhere,” said Madison.

“We are camping people. We were outdoors hiking every day before we had kids and our kids seem to inherit that gene. They always want to be out exploring. We want to be able to give him the opportunity to explore nature,” said Blake.

Blake added that the Action Trackchair will also useful for him throughout his life.

“This chair should actually fit him for the rest of his life, so it’s going to be a life long tool for him,” said Blake.

But, above all else, Madison and Blake hope the chair will give them more opportunities to share different experiences with Mason that may not be possible otherwise.

“We don’t know what the future is going to look like. We are trying to enjoy every day as much as we can and spend all the time we can with Mason and hope for the best,” said Blake.