A young Edmonton boy who underwent a complicated heart transplant at the age of six was presented with an out-of-this-world keepsake from a galaxy far, far away.

Mason Thomas, now eight, received a 3D model of his heart on Wednesday from the surgeons who performed the operation.

But this isn’t your standard biology-class model heart. It’s built in the form of a TIE Fighter from Star Wars.

The team at the University of Alberta constructed the 3D model to explain to Mason why he needed the transplant.

"It's often hard for us to explain to families exactly what's going on with their heart and why they need the surgery," said Dr. Charles Larson, a Stollery Hospital pediatrician. "We thought to ourselves, 'Could we make these congenital hearts come to life by 3D printing them?'"

They took on the challenge, spending months programming to make the 3D-printed heart possible. But there was one last goal they had to achieve.

Mason, a big fan of the sci-fi franchise Star Wars, made a special request for the heart to take the form of his favourite Star Wars spacecraft.

In the movies, TIE Fighters are used by the villainous galactic empire led by Darth Vader. But on Wednesday the fictional fighters were used for the light side of the force.

"They actually printed this! They actually did it!" a delighted Mason said after being presented with the 3D model.

He needed the transplant after being born with hypoplastic left heart syndrome, which turns fatal if left alone.

"They told him that after the transplant that he would be able to see his old heart..and it became very important to him because he really wanted to know why he was sick," said Brandie Thomas, Mason's mom.

But because of a miscommunication, Mason was never able to see his old heart.

"He was pretty upset, and one of the nurses here, she's amazing, remembered his story," said Thomas. "So when they were talking about printing 3D hearts she brought Mason up, that he really wanted to see his old heart and have some closure with that."

Using CAT scans, a team of experts from Alberta Health Service’s Servier Virtual Cardiac Centre and the UofA’s faculties of Medicine & Dentristry and Engineering worked on the model. After receiving it, Mason was treated to a tour of the labratory where it was constructed.

“This is about creating awareness," said Larson. "This is about educating people about congenital heart disease, and not just healthcare workers, but also the families themselves." 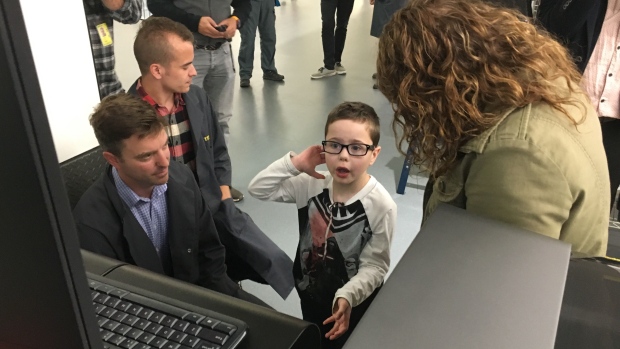