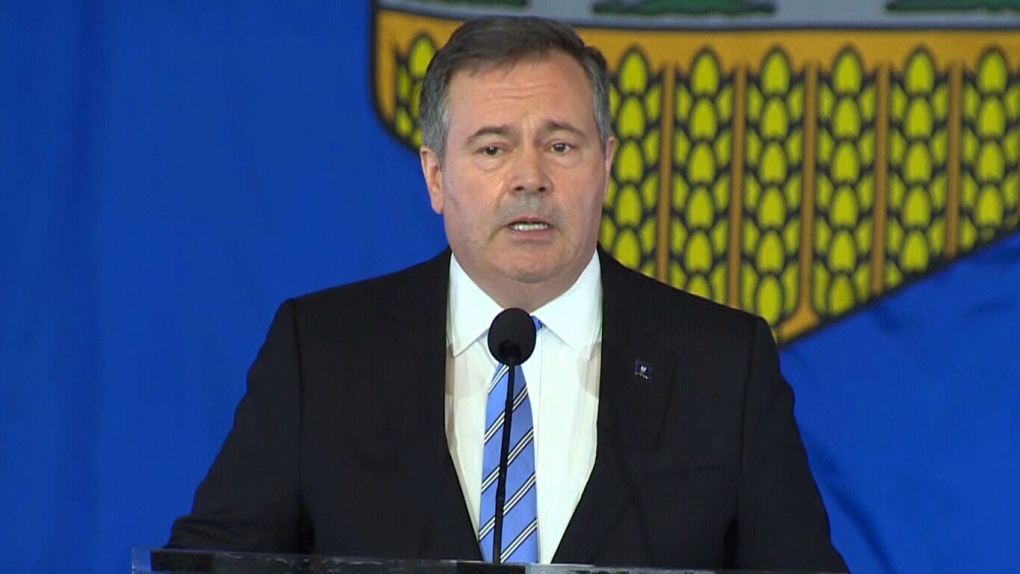 EDMONTON -- Don't cry for me, Alberta, I was leaving anyway.

It's Premier Jason Kenney's swan song message as he prepares to depart the province's top job, forced out by the very United Conservative Party he willed into existence.

"I was never intending to be in this gig for a long time," Kenney told an audience earlier this month. He had planned for one more provincial election, he said.

Instead, UCP members pick a new leader on Thursday, turning the page on a triumph-turned cautionary tale that saw Kenney's philosophy and management style crash head-on into a once-in-a-generation catastrophe.

Kenney, whose office did not respond to requests for an interview for this story, rode to success in the 2019 provincial election.

It was a time of woe. Alberta's economy was in the doldrums, its oil and gas sector in the bust phase of its traditional boom-bust cycle. Budgets were bleeding multibillion-dollar deficits.

Some Albertans were angry with Ottawa over rules deemed to be hindering energy projects. And they felt like suckers, giving billions of dollars in equalization payments and in return being ignored or demonized as climate criminals.

They sought a stick with which to hit Prime Minister Justin Trudeau.

Kenney was that stick. He came toting a "fight back strategy," vowing to take on Trudeau and the other happy hit men of the "Laurentian elite" hell-bent on strangling Canada's energy "golden goose."

To him, oil and gas were not just good business. It was a higher calling, a "moral cause" to redistribute earth's bounty to neighbour nations so they could avoid buying it from human-rights-abusing dictators.

Taking the reins of power, he went to work.

He gambled big and lost $1.3 billion on the failed Keystone XL oil pipeline.

Kenney's plan for Alberta was founded on the conservatism of "prosperity first," said political scientist Jared Wesley with the University of Alberta.

Kenney, said Wesley, spelled it out in his maiden speech as UCP leader in 2017 by reminding supporters that "in order to be a compassionate and generous society, you must be a prosperous one first."

Wesley said such an ethos may have captured the mood of conservatives and enthralled others, "but as Albertans and their government were forced (during COVID-19) between prosperity and compassion -- or as Kenney put it `livelihoods and lives' -- his focus on livelihoods was really out of touch with what people were looking for."

Political scientist Laurie Adkin said the prosperity-first doctrine was narrowly defined to the benefit of a select few.

"There was really no light between the Kenney government and the oil and gas industry, and that is not good for democracy," said Adkin with the University of Alberta.

"Government needs to represent the public interest and not a single economic sector to the cost of everything else."

The math was simple, the corollary obvious: If Alberta's identity is defined by economic prosperity through oil and gas, then those who challenge this worldview are, well, anti-Albertan.

Quebec was an ingrate, fighting pipelines with one hand while accepting Alberta equalization money with the other. A U.S. governor challenging a cross-border pipeline was "brain-dead."

To fight slurs on oil and gas, Kenney spent millions to create a "war room" that delivered a parade of gaffes, including a public fight with a children's cartoon about Bigfoot.

Kenney launched a $2.5-million public inquiry into foreign funding of domestic green groups fighting Alberta's oilsands. It never held an inquiry in public, went over time and over budget, and determined the funding was relatively modest and totally legal.

Over time, the enemy tag broadened. Kenney characterized the NDP as disloyal for its COVID-19 criticism. He linked one radio interviewer's criticism of his government to an attack on Alberta itself. Reporters were at times dismissed as shills for the NDP or special interest groups.

No quarter was given, even in good times. When Trudeau came to Edmonton to announce a joint $10-a-day child-care program, Kenney, from the podium, said the money was recycled provincial funds anyway and Quebec got a better deal.

As COVID-19 hit with full force in 2020, decimating the economy, Kenney found himself battling a two-front war as bubbling rifts between him and his caucus and party exploded.

Those divides had started before the election, when Kenney promised his UCP would be run by and for the members, but then at the party's founding convention in 2018 told reporters "I hold the pen" on what will and won't be policy.

The UCP won in 2019 on the strength of rural votes, said political scientist Duane Bratt. But when Kenney picked his first cabinet, it was Calgary-centric, leaving disgruntled backbenchers seething in silence, poised to push back when things went south.

"It was a top-down government," said Bratt with Calgary's Mount Royal University.

"He did not have good relations with his MLAs. He hired attack dogs as staffers. And they just didn't bully the NDP and journalists and members of the public, but their own MLAs as well."

Kenney's government was lauded in the first wave of COVID-19, invoking rules and closures to keep gatherings down, hold the illness at bay and keep hospitals operating.

But in subsequent waves, Kenney's promise to balance "lives and livelihoods" left him whipsawed by those wanting rules to keep hospitals from cratering and those who felt the rules were unnecessary and a violation of personal freedom.

He tried to find a magic middle ground, which resulted in shifting restrictions: regional, provincial, on for some, off for others. Each time he waited until Alberta's health system was on the brink of collapse before acting, with thousands of surgeries cancelled and waiting rooms jammed.

He announced Alberta was open for good in late spring of 2021, with all restrictions to be lifted earlier than the rest of Canada in a "Best Summer Ever" campaign. There were hats with that slogan and tweets at naysayers: "The pandemic is ending. Accept it."

Within months, COVID-19 had overwhelmed Alberta's hospitals so catastrophically that triage rules were imminent and the Armed Forces called in.

Extreme action was needed, so Kenney introduced a type of vaccine passport, something he had promised he would never do -- a policy U-turn that enraged many in his party.

Then came the blame.

The gig was not going well. Poll numbers were in free fall. UCP backbenchers openly questioned the restrictions -- and Kenney.

And there were scandals piling into each other like cars on a freeway.

Alohagate: a bunch of Kenney caucus members ignored calls to stay home over Christmas to avoid the spread of COVID-19 and jetted off to sunny climes while Albertans shivered at home under strict gathering limits.

UCP caucus chair Todd Loewen resigned his post and was kicked out of caucus after publicly demanding Kenney quit for botching vital files, ignoring the backbench, and running a top-down, tone-deaf administration.

"We did not unite around blind loyalty to one man," pronounced Loewen.

Kenney and some cabinet confidantes were surreptitiously photographed on the balcony of his office enjoying drinks and dinner in obvious violation of distancing rules.

The premier insisted there was no rule-breaking. But as outrage mounted, he announced his team had returned to the scene of the dine, pulled out the measuring tape, checked the chairs and concluded that, yes, they had gathered too close.

There was more: a lawsuit alleging the premier's office was fostering a "poisoned work environment;" drink parties in the agriculture minister's legislature office; the justice minister trying to interfere in the administration of justice by calling up Edmonton's police chief on a traffic ticket.

Humming in the background was a long-running RCMP investigation into potential criminal identity fraud in the vote that saw Kenney elected UCP leader.

And this was on top of Kenney's government passing a law in 2019 that sacked the election official investigating Kenney's UCP for campaign violations.

As the calendar flipped to 2022, the drumbeats of dissent grew louder, even as COVID-19 receded and oil and gas prices soared, returning Alberta to multibillion-dollar budget surpluses.

UCP discontents had been angling to accelerate a party leadership review.

That vote was moved, changed to a special one-day vote, then altered again to a mail-in referendum. Critics said Kenney's team was moving the goalposts to keep from losing.

Kenney called his critics "lunatics" and then, in his speech to kick off the leadership vote, asked for their forgiveness.

On May 18, he got 51 per cent support -- technically enough to survive, but he said it was time to go.

On Thursday, UCP members meet in Calgary to seal his fate.

The outcome is not in doubt. A new premier will be chosen.

The gig is up.

This report by The Canadian Press was first published Oct. 2, 2022.

Canadians look to side hustles to make up for inflation pressure, but at what cost?

Canadians' budgets are being stretched thin as the cost of living climbs -- and to compensate, some are taking on a side hustle.

Alberta secures 5 million bottles of children's pain and fever meds to distribute across province, then country

Alberta Health Services has procured five million bottles of children's acetaminophen and ibuprofen and will distribute the drugs first across the province, then across Canada, the Alberta government says.

Jamaica's prime minister declared a widespread state of emergency on Tuesday to fight a surge in gang violence on an island with one of the highest murder rates in the region.

opinion | How to get the increased GST tax credit

To help combat inflation and help lower- and modest-income families, over the span of six months, Ottawa is issuing an additional one-time GST tax credit to eligible taxpayers. Personal finance contributor Christopher Liew breaks down who's eligible for the increased GST credit, explain how to get it, and how much you could receive.

Amid a shortage of firefighters across Canada, the Canadian Association of Fire Chiefs (CAFC) is calling on the federal government to address the grave impact these shortages will have on vulnerable communities.