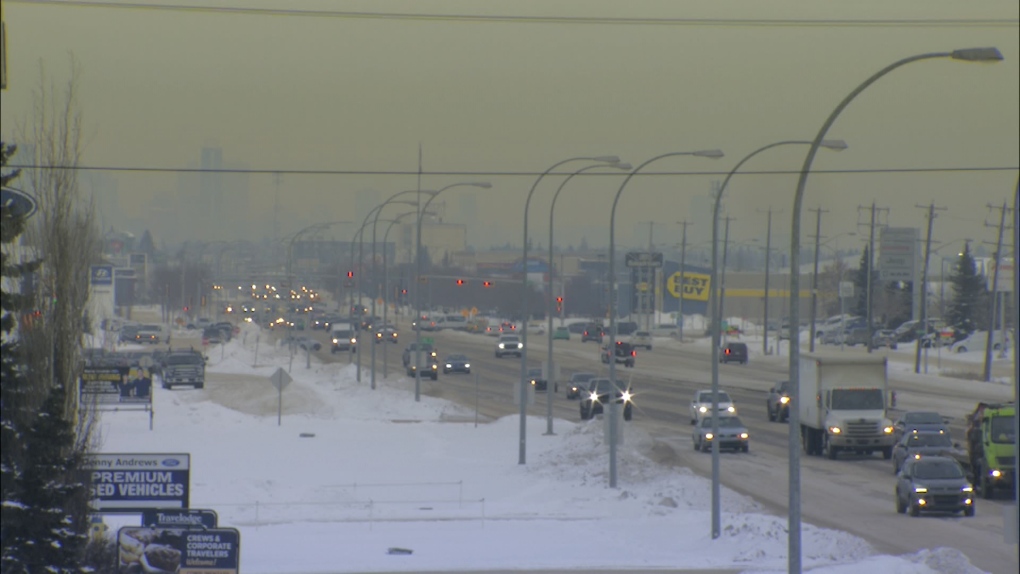 Edmonton's AQHI rating rose to a level six on Jan. 20, 2020, at the start of a week of warm temperatures that will effectively trap emissions over the city for a few days.

The AQHI rating settled at a level six – in the middle of the “moderate risk” zone – Monday afternoon after steadily rising throughout the morning. By 5 p.m., it had jumped again to level nine.

A day before, it had been just a level two.

“The increase in high rating of AQHI is due to the pretty steep inversion in the atmosphere we have right now,” said Environment and Climate Change Canada meteorologist Sara Hoffman.

She explained warm air flooding into Alberta isn’t mixing or ventilating in the atmosphere.

“Warm air likes to rise, so if we have warm air over top of cold air, then the air wants to stay where it is."

The result is a stable atmosphere and trapped nitrogen dioxide and airborne particles from things like smoke and exhaust.

“We often see that some of our worst air quality air events are in the middle of winter when we have these very stable atmospheric profiles,” Hoffman said.

“It doesn’t mean a big warming event is happening, it’s how the atmosphere sets itself up.”

While she said Edmonton’s NO2 and PM 2.5 – or particulate matter – levels aren’t significantly high, the moderate air quality rating means those with lung issues should take precautions.

“Car exhaust, or exhaust from your house if you have a fire or a wood burning fireplace, all of that instead of being taken straight up and away and mixed out of the atmosphere is getting trapped near the surface. And because of that, our AQHI is rising,” Hoffman told CTV News Edmonton.

The government agency expects the AQHI rating will stay in the moderate range for a few days, but said as warm temperatures continue, the strength of the temperature difference will weaken.

Those with health concerns are advised to talk to their doctor, limit time and strenuous activity outside, and ensure their spaces are well ventilated or purified.