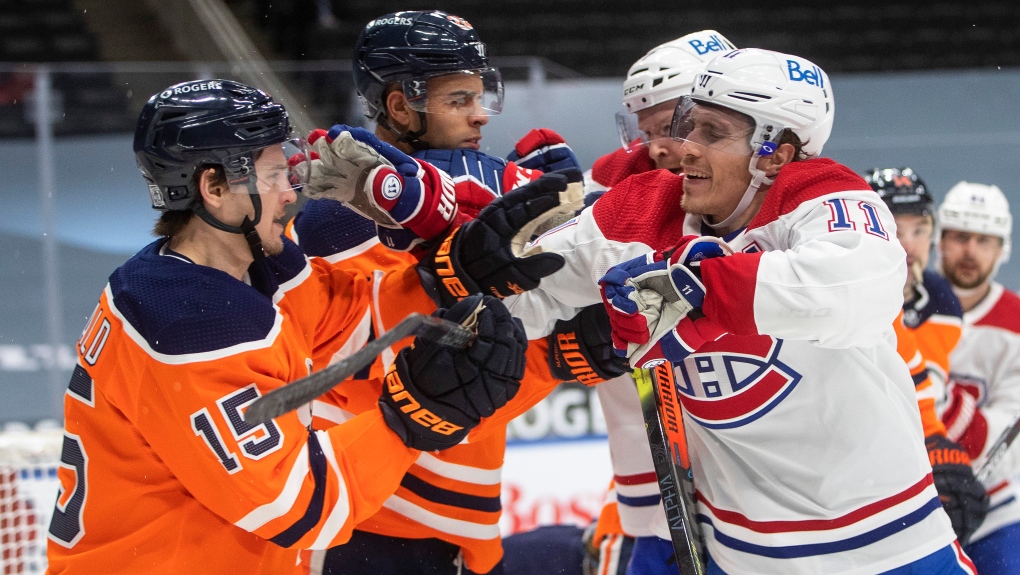 With just seconds left on the clock in the second period, Julien challenged a no-goal call, knowing the result could swing the game's momentum.

Success, and his squad would go up 2-0 on the Edmonton Oilers heading into the third frame. Defeat and they'd start the final period trying to kill yet another penalty.

“You're always a little nervous because there's no guarantees in whether you win that or not,” Julien said. “There was a bit of a risk but I really felt that we could win this challenge.”

Upon review, the call on the ice was overturned.

Shea Weber was awarded his first goal of the season, a tally that was ultimately the game-winner in Montreal's 3-1 victory over the Oilers.

As he headed to the bench after popping a shot in off the back of Edmonton goalie Mikko Koskinen, Weber wasn't sure the goalie interference call would be overturned.

“You never really know,” the Canadiens defenceman said. “We're just thankful because it gave us a little bit of a boost at the time.”

Rookie Alexander Romanov and Artturi Lehkonen also scored for Montreal (2-0-1), which beat Edmonton (1-3-0) for the second time in three nights. The Habs also trounced the Oilers 5-1 on Saturday.

Koskinen stopped 31-of-34 shots for the Oilers.

Edmonton had been strong through the first frame, outshooting the Habs 12-6 and forcing the visiting squad to kill three penalties in a row.

But Edmonton faltered in the second and the challenged goal seemed to be a dagger the Oilers simply couldn't recover from.

“Obviously we hadn't played a great period up to that point,” said forward Kyle Turris. “We can't let that happen. So the fact that they scored at the end of it, maybe it was a bit deflating, but we need to be able to rebound at the break and come out like we did in the first period.”

The Canadiens penalty kill was crucial to clutching Monday's victory, shutting down Oilers snipers Connor McDavid and Leon Draisaitl on seven power plays, including more than 30 seconds of 5-on-3 in the first period alone.

Edmonton had some promising opportunities across the stretch - including a big shot from McDavid that ricocheted off the knob of Allen's stick - but the Habs didn't surrender a goal.

Killing so many penalties on Monday wasn't easy, said Allen, who made 25 saves in his debut for the Candiens.

Ryan Nugent-Hopkins said Edmonton's power-play units were moving around well and getting some good looks on Monday.

“I think when teams are pressuring you like that and things aren't clicking, maybe we need to shoot the puck more, get rebounds and create chaos,” he said.

Over the two-game series, Montreal successfully kept McDavid and Draisaitl - who led the league in scoring last year - from putting the puck in the back of the net. The only appearance either made on the scoresheet was a secondary assist for McDavid in Saturday's game.

Heading into Edmonton, the Canadiens knew shutting down the dynamic duo would be key, Julien said.

“The reason that we're coming out of here with four points is probably because we were able to really nullify that one-two punch that can win games on their own,” the coach said.

Montreal will open a three-game series with the Canucks in Vancouver on Wednesday. The Oilers will be in Toronto the same night to battle the Leafs.

This report by The Canadian Press was first published Jan. 18, 2021.