More than a dozen guns seized from Red Deer home 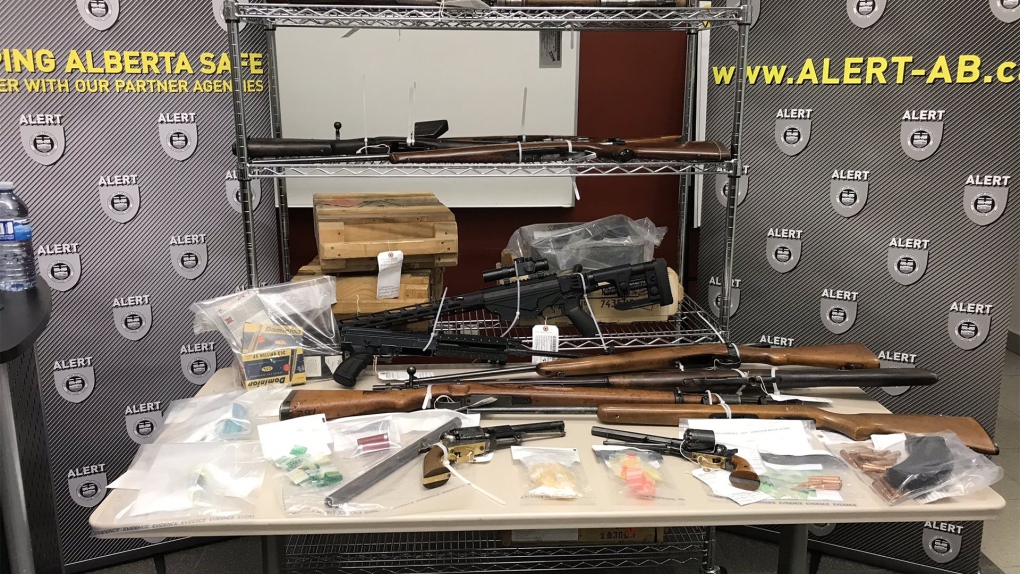 Police display the proceeds of a gun seizure from a Red Deer home on Sept. 11, 2019. (Angie Mellen/CTV News Edmonton)

Police have seized more than a dozen guns from the Red Deer area, some of which were stolen.

The Alberta Law Enforcement Response Team executed a search warrant at a home in the Clearview Ridge subdivision.

Investigators seized 12 rifles, including one semi-automatic rifle, two handguns, a sawed-off shotgun, a prohibited magazine, more than 9,000 rounds of ammunition, and 56 grams of cocaine worth about $5,600.

Take a look at the seizure made by @ALERT_AB . Investigators seized 12 rifles, including one semi-automatic rifle, two handguns, a sawed-off shotgun, a prohibited magazine, more than 9,000 rounds of ammunition, and 56 grams of cocaine worth about $5,600. #RedDeer pic.twitter.com/KhoR8xwhqR

“Seizures like this represent victories for public safety,” said ALERT Regional Team Officer in Charge Sean Boser. “Firearms are used in the drug trade to instill fear, intimidation, for robberies and for home invasions, for shootings and murder. Most of the time the instances are targeted but we would be naïve to believe our collective public safety is not put at risk.”

“It is concerning to see this type of arsenal in the wrong hand and that the firearms were allegedly being trafficked to other criminals,” said Red Deer RCMP Superintendent Gerald Grobmeier. “Hopefully we have saved some people some significant grief. These firearms aren’t used for hunting, they’re there for a very nefarious purpose and we have taken that ability away from them.”

Police say four of the guns were reported stolen after a break-in in Three Hills, Alta. in August and they are urging gun owners to safely lock up their firearms.

“I think it’s diligence also on the public in terms of storing firearms properly, reporting firearms if they’re stolen, because they fall into the hands of individuals that we don’t want to have them,” said Boser.

Investigators are now trying to determine if the guns have been used in any criminal activities.

Zane Middlemiss, 26, and Sage Sunderwald, 21, have been charged with 80 gun and drug-related offences. Both suspects are known to police, and were previously arrested in February for possession of firearms.