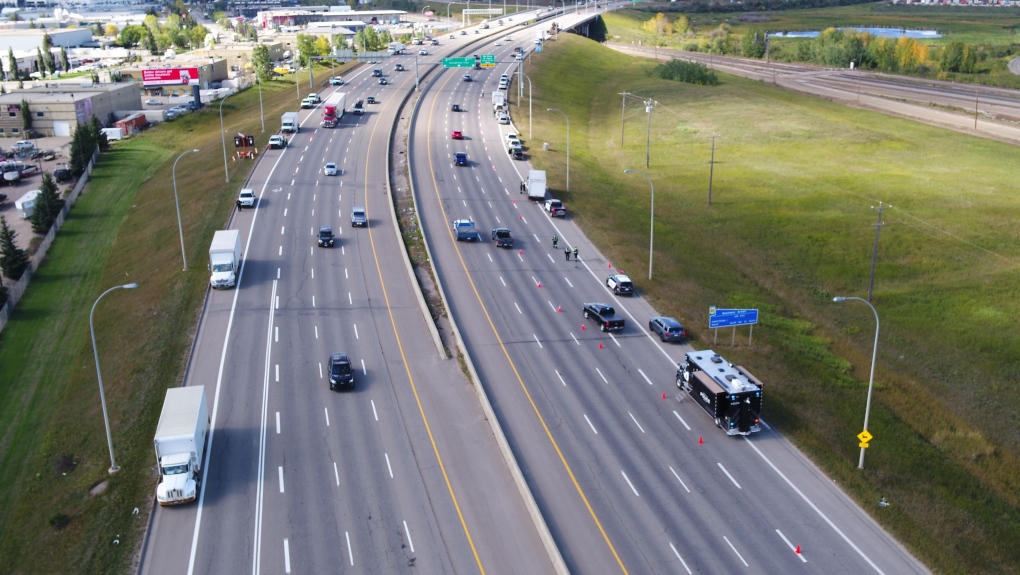 The Edmonton Police Service says more than half of the vehicles it inspected during its 2021 autumn blitz failed (Source: EPS).
EDMONTON -

A fall inspection blitz from the Edmonton Police Service (EPS) found more than 100 vehicles it pulled over – or 52 per cent – failed.

According to a press release issued by EPS Friday, a total of 216 vehicles were inspected as part of its fall commercial vehicle check, hosted for the first time since 2019. Police say that the 112 pulled off the road had defects posing “immediate risk(s)” to the safety of others on the road.

Only 65, or 30 per cent of those inspected, passed. Thirty-nine vehicles required non-urgent attention.

EPS said it uncovered 601 violations, resulting in 174 tickets issued and one breath test warning – for a total of $56,376 in fines levied.

Twenty-eight vehicles were towed as police say they were in “dangerous condition.”

“The bulk of our inspections this year looked at commercial vehicles traveling in and around the City of Edmonton,” said Sgt. Dave Beattie, with EPS commercial vehicle investigation unit. “It’s important to note that despite the one very dangerous semi-truck we found, most of the long-distance highway trucks we see are in safe condition.

“So while the results are not indicative of the transport industry as a whole, it shows that there is work to be done within certain sectors,” Beattie added, in a statement.

Compared to 2019 inspection statistics, EPS says the out-of-service rate has increased by 10 per cent, with 231 inspections completed at that time.

EPS said the most dangerous vehicle inspected was a U.S. semi-truck towing heavy trailers that had unsecured cargo, in addition to mechanical issues including brakes and trailer attachment points.

“It is my hope that future operations like this, combined with education and collaboration with industry advocates, such as the Alberta Motor Transport Association (AMTA) will go a long way to improving the safety of the commercial vehicles operating on our roads,” Beattie said.

A long-serving member of Parliament was stabbed to death Friday during a meeting with constituents at a church in England, an attack that united Britain's fractious politicians in shock and sorrow. A 25-year-old man was arrested at the scene.

Forty-seven employees at Ottawa's Children's Hospital of Eastern Ontario have been placed on unpaid leave for failing to comply with its mandatory COVID-19 vaccination policy.

An Ontario couple sued because they wrote a bad online review about a window company have been awarded more than $166,000 after a judge found they were bullied over it.