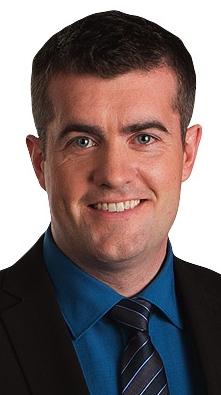 April 2021: Bill Fortier is no longer with CTV News Edmonton

Bill Fortier joined the CTV News team in September 2007. Since then, he has produced, anchored and reported for every CTV Edmonton newscast. He is currently reporting weekdays.

Born and raised in Winnipeg, Bill got his start working at CKDM Radio in Dauphin, Manitoba and later moved back to Winnipeg to work at CityTV. After spending five years in his hometown, Bill made the move out west to take on new opportunities and challenges.

While studying broadcasting in college, Bill paid the bills performing at a local dinner theatre and delivering singing telegrams.

Bill has always had a passion for news and current events and loves the opportunity to report on the people and events that make up the ongoing history of this region.

After arriving in Edmonton, Bill immediately fell in love with the downtown skyline that rises above the majestic river valley.

The thing Bill loves most about Edmonton is the kindness and heartiness of the people. As Western Canadians, we endure and celebrate temperatures from minus 30 to plus 30, conditions from blizzards to heat waves – and never lose our sense of how lucky we are to live in this region of the world.