EDMONTON -- Investigators hope to track down dash-cam footage of a dramatic police chase that ended in a man being fatally shot by officers near Leduc on Wednesday.

The RCMP Serious Crimes unit is specifically asking for drivers to come forward who may have captured a black, four-door BMW sedan between 8:15-9:45 a.m.

"We're putting the call out for that because we have a few gaps ... we're looking for anybody that might have footage with the BMW," said Cpl. Laurel Scott with Alberta RCMP.

Those with footage are asked to provide it to Blackfalds RCMP on a USB stick.

The rampage began Wednesday morning with a gun complaint centering on a Blackfalds home.

RCMP said when they arrived, officers were shot at and a woman in the area and not connected to the home was struck by a stray bullet.

"As soon as i looked down to get my phone all I could hear is pop, pop, pop, pop, pop like a lotta rounds, 30 to 40 rounds," witness Chad Cammock told CTV News.

The shooter fled north on the QEII, prompting Mounties to use a spike strip to slow him down.

RCMP tell me the 27-year-old man fatally shot by police after the chase was not known to them prior to the incident.

Police said when the car stopped, a confrontation ensued that resulted in the 27-year-old man's death.

A Mountie was also seriously injured in the confrontation.

Because it was a police shooting, the Alberta Serious Incident Response Team, the province's police watchdog, is now looking into the series of events. 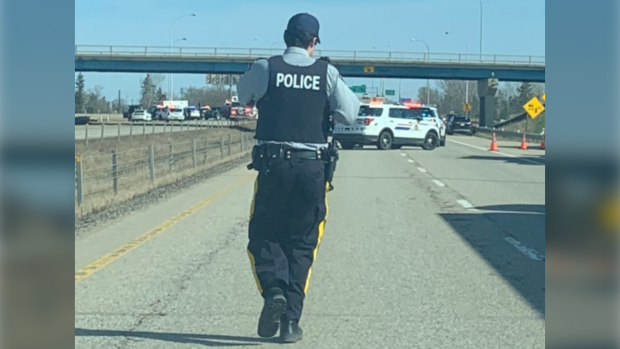