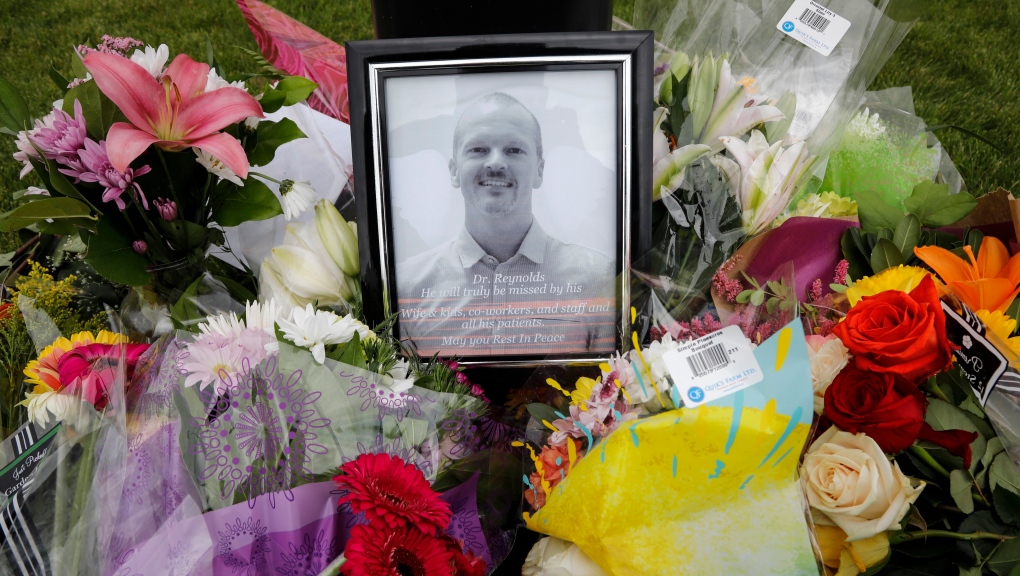 An impromptu memorial for Dr. Walter Reynolds, who died after he was attacked in an examination room rests outside the Village Mall walk-in clinic in Red Deer, Alta., on August 11, 2020. THE CANADIAN PRESS/Jeff McIntosh

RED DEER -- A man charged in the slaying of a family doctor at a central Alberta medical clinic made a brief court appearance Thursday in advance of his trial later this year.

Deng Mabiour, 54, has been deemed fit to stand trial on a charge of first-degree murder in the death of Dr. Walter Reynolds, who was killed at the Village Mall Walk-In Clinic in Red Deer last August.

Court of Queen's Bench Justice Paul Belzil, who will be presiding over the case, issued a publication ban on what was discussed in court Thursday.

Mabiour, clad in a blue prison jumpsuit and wearing a white mask, was accompanied by two sheriffs as he sat in the prisoner's box.

Lawyer Jason Snider was appointed an amicus curiae, or friend of the court, to help Mabiour during his trial, which is set to run from Nov. 22 to Dec. 17.

Pretrial motions are to be heard Oct. 4.

Snider said outside court that there will be two main motions. One will involve the Crown seeking to have Mabiour's statement to RCMP following his arrest entered into evidence. The second will be to accredit expert witnesses to testify at the trial.

Mabiour has made it clear throughout the proceedings that he intends to represent himself.

The Crown has previously indicated it would apply to the court for an order that Mabiour not be allowed to cross-examine civilian witnesses.

Reynolds, a 45-year-old father of two, was attacked with a weapon while working at the clinic on Aug. 10, 2020. He died in hospital.

One witness told media that she was in the waiting room when she heard cries for help and saw a man with a hammer and a machete.

This report by The Canadian Press was first published May 20, 2021.