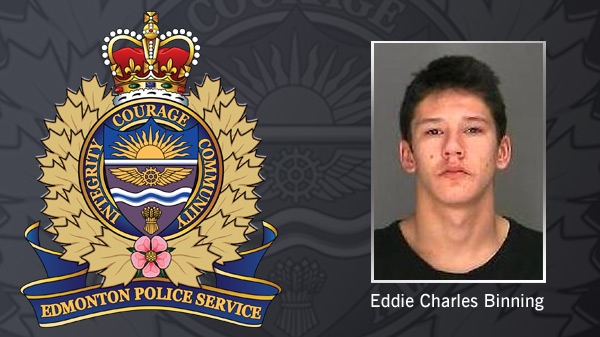 Edmonton Police have issued a warrant for Saskatoon man Eddie Charles Binning, 21, for his alleged role in a recent murder. Supplied.

Five days after a man was found slain outside of a north side apartment building, and two suspects were charged, police have issued a warrant for a third man in connection to the homicide.

On Monday, Edmonton police issued a second-degree murder warrant against Eddie Charles Binning, 21, from Saskatoon, in connection to the murder of 41-year-old Daniel Barata last week.

Binning is described as:

Investigators believe the suspect may have returned to Saskatoon, as a result the warrant covers Alberta and Saskatchewan.

On Wednesday, May 23 at about 1 am police were called to a weapons complaint at an apartment building located on 129 Avenue and 64 Street.

Officers arrived to find the body of a deceased male outside the building.

The next day, the Medical Examiner confirmed Barata had died as a result of a stab wound.

Binning is the third person to be connected to the homicide; two others were charged in the days following the murder.

Over the weekend, police confirmed they had charged 29-year-old Kevin Witchekan with second degree murder, robbery, and other related charges.

Both men are from Edmonton, and are in custody.

Anyone with information as to Binning's whereabouts is asked to either call the Edmonton Police Service non-emergency line at 780-423-4567, Crime Stoppers at 1-800-222-TIPS (8477) or their local police department.