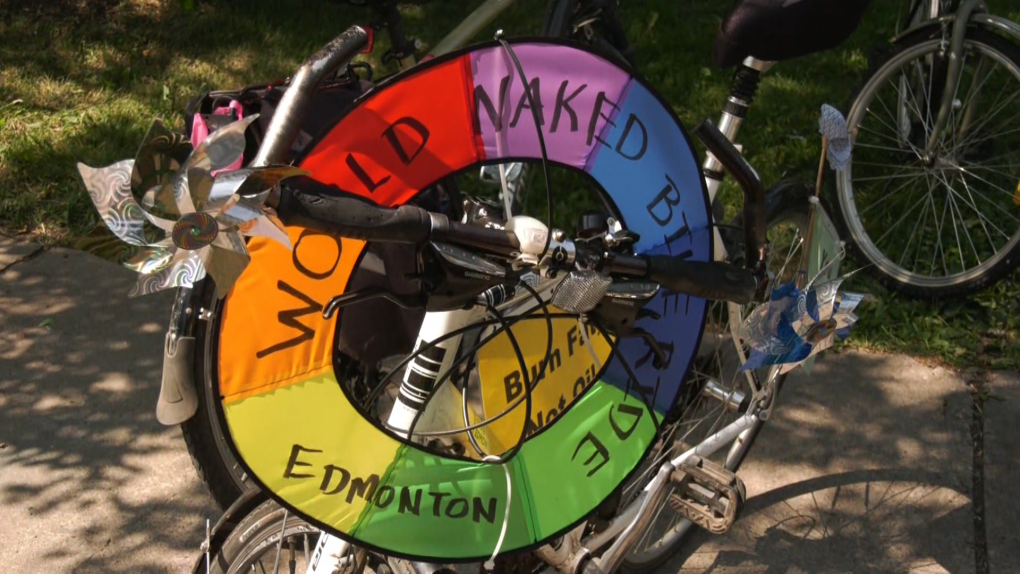 A handful of bicyclists bared it all on Saturday to help raise awareness about bicycle safety.

The event in Edmonton was part of World Naked Bike Rides, a series of clothing-optional public protests held around the world to encourage bicycle safety. Similar events have been held in Toronto, Montreal, and Vancouver.

Paul Gagnon, an event organizer, told CTV News Edmonton in an interview that the group wanted to highlight bike safety.

“There’s 2,700 connections between bikes and cars in this country,” he said. “A lot of that with a change in infrastructure could be avoided.”

The group wants to continue to see separated bike lanes throughout the entire city.

Gagnon said that being naked for the bike ride helps show the vulnerability of cyclists as they share the road with motorists.

“It attracts attention to the message,” he said. “It’s fun to participate.”

Riders gathered at Light Horse Park and travelled through intersections in central Edmonton where the most cyclist-vehicle collisions have occurred.

U.S. Justice Department officials and Huawei executive Meng Wanzhou have reached a deal to resolve the criminal charges against her, allowing the woman who has been at the centre of a years-long major geopolitical case to enter into a deferred prosecution agreement and be released, under certain terms.

A draft report of the election review in Arizona's largest county by supporters of former U.S. president Donald Trump found that current U.S. President Joe Biden did indeed win the 2020 presidential contest there, an embarrassing end to a bizarre quest to find evidence supporting Trump's false claim that he lost because of fraud.

Alberta Premier Jason Kenney is confronting a full-throated justification for a pink slip thanks to his chronic tone-deafness during the pandemic, incredulously topped off by taking a two-week vacation in Europe this month as Albertans were dying from the consequences of his policies, writes Don Martin in his exclusive column for CTVNews.ca.