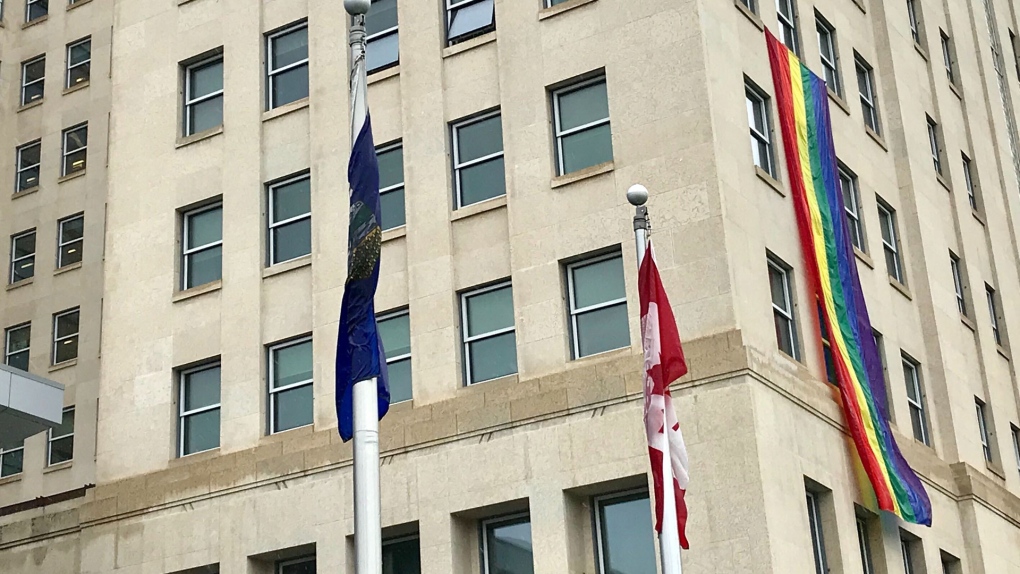 EDMONTON -- Alberta’s NDP is flying its own massive flag for Pride Month, after the official legislature rainbow flag was taken down in about 24 hours last week.

UCP Minister Leela Sharon Aheer posted photos of the flag raising at the Federal Building on Monday. On Tuesday, the rainbow flag was replaced with a flag honouring Philippine Heritage Month, as per legislature policy.

“We decided if the UCP doesn’t want to flag fly the pride flag on the eve of what would have been Pride Edmonton, we’ll just fly our own,” NDP Leader Rachel Notley said in a Twitter video Thursday.

The roughly three-storey-tall rainbow flag was flown out of the window of Notley’s fifth-storey Federal Building office on Thursday and was still flying Sunday afternoon.

“We were really disappointed when the UCP took the flag down so quickly,” NDP MLA Janis Irwin said Sunday. “I think it’s really important to have visual shows of support for the community.”

Irwin admitted she didn’t know if the flag violated any legislature rules or not, but said she wasn’t aware of any complaints from the UCP, the legislature or the public.

The NDP plans to fly it all of June in recognition of Pride Month, unless there’s a valid security or safety concern, Irwin said.

When asked about the controversy on Wednesday, Premier Jason Kenney admitted he wasn’t sure who was in charge of legislature flags.

“To be honest, I don’t know who controls the flag policy. I thought it was the legislature,” Kenney said.

“The duration of any display on the courtesy pole at the Alberta Legislature Grounds, Capital Plaza and at McDougall Centre shall be for one day from sunrise to sunset,” the policy read.

“Unexpected and unique requests for display may be referred to Premier for decision under the Premier’s discretion policy,” another point of the policy read.

The NDP flag has been a hit on social media, Irwin said, adding a "young racialized trans person" reached out to her to personally thank her.

“If they’re walking on the legislature grounds and they see a flag flying it shows that they’re safe and they’re seen and they’re loved,” she added.

Last year, UCP MLAs raised the pride flag at the Federal Building in a public celebration on June 7, and said the flag would remain up for the duration of pride month.

CTV News Edmonton reached out to a UCP spokesperson Sunday night for comment on the NDP flag but did not receive an immediate response.