The National Energy Board has endorsed an expansion of the Trans Mountain pipeline following a reconsideration of its impact on marine life off the B.C. coast.

But it says those consequences can be justified in light of what would be the pipeline's benefits.

"While these effects weighed heavily in the NEB's consideration of project-related marine shipping, the NEB recommends that the government of Canada find that they can be justified in the circumstances, in light of the considerable benefits of the project and measures to minimize the effects."

The energy board says it will impose 156 conditions on the project if it is approved. It has also made 16 new recommendations to the federal government.

Among those recommendations are measures to offset increased underwater noise and the greater chance that a whale could be hit by a ship. They also include suggestions for better spill response and reducing emissions from tankers.

The board notes that the new recommendations deal with areas outside its jurisdiction, but within the purview of the federal government.

Reaction from environmental groups was swift.

Stand.earth, which had tried unsuccessfully to widen the scope of the board's reconsideration, had said before the ruling that it expected the board to endorse the project again.

"Today's recommendation is the direct result of the Prime Minister's Office telling the NEB and federal bureaucrats to 'get to yes' on this project," Tzeporah Berman, director of the Vancouver environmental group, said in a statement.

"Scientific evidence filed with the NEB clearly shows that there is not enough data to ensure the safety of the marine environment ... and that the NEB failed to address the climate impacts of this project.

"The Trans Mountain pipeline is not in the public interest and will never be built."

Alberta has been fighting hard for the Trans Mountain expansion so that the province could move more crude oil to ports and from there to lucrative overseas markets.

The energy board's original approval of the project was set aside last summer by the Federal Court of Appeal, which said the regulator had not properly considered marine life.

The NEB's report starts the clock on a 90-day period for the federal government to decide whether the project should proceed.

Officials in Natural Resources Minister Amarjeet Sohi's office have said a final decision won't be made until consultations with affected Indigenous groups are complete.

The consultations were also an issue the federal Appeal Court raised when it put a halt on the project. It said talks with First Nations in the area had been insufficient.

The regulator's support does not guarantee restart of construction on the controversial pipeline. Sven Biggs, climate campaigner for Stand.earth, predicted before the ruling that there will be more lawsuits and delays resulting from the board's support of the project. He also said there will be protests in the streets and along the pipeline route if Ottawa decides to go ahead

Vanessa Adams, spokeswoman for Sohi, wouldn't comment on Thursday on whether a cabinet ruling could be delayed.

She said in an email the federal government wants to "achieve the required public trust" to help move resources to market by first addressing environmental, Indigenous and local concerns.

She said a 60-member consultation team in British Columbia and Alberta has met with more than 85 of 117 Indigenous groups that would be affected by a Trans Mountain expansion and more meetings are taking place daily. 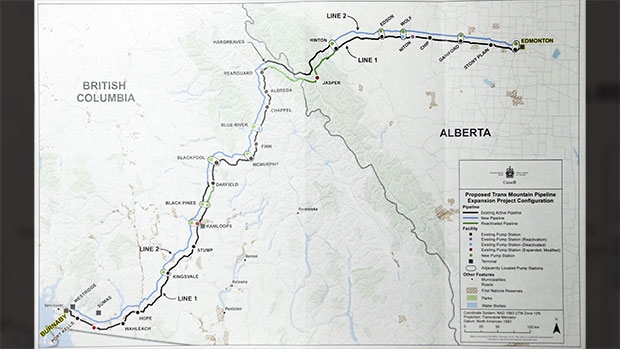 A map of the proposed Trans Mountain pipeline expansion as the National Energy Board, releases the board's reconsideration report on marine shipping related to the Trans Mountain expansion project, in Calgary, Friday, Feb. 22, 2019. (THE CANADIAN PRESS/Jeff McIntosh)