Each of the measures announced will apply to Albertans, businesses, and municipalities in areas with more than 50 cases per 100,000 people and with 30 or more active cases.

Any municipality not within those thresholds will revert back to restrictions at step zero of the provincial relaunch plan.

The measures included moving all Kindergarten to Grade 12 classes to at-home online learning starting Friday until at least May 25. All post-secondary institutions will also be limited to online delivery.

Workplaces with COVID-19 outbreaks will be mandated to close for 10 days, with exemptions for critical workplaces.

Retail businesses will have capacity slashed to 10 per cent of their fire code or a minimum of five customers, effective immediately.

Restaurants will be limited to takeout and delivery only under the new restrictions.

Outdoor social gatherings, currently limited to 10 people, will be limited to five, with a strong recommendation that people limit such gatherings to no more than two family cohorts, Kenney said.

Places of worship will be limited to 15 people, as they were last spring during the first wave of the pandemic.

Funeral attendance will be limited to 10 people, instead of the current 20 people allowed.

“Governments must not impair peoples’ rights and livelihoods unless it is absolutely necessary to save lives,” Kenney said. “Unfortunately that is the situation we are facing today.”

“We will not permit our healthcare system be overwhelmed,” he added.

Alberta is reporting the highest number of COVID-19 cases per capita in all of Canada and the United States.

According to Health Canada, Alberta leads the country for COVID-19 infections per capita. As of Monday, the province had 308 cases per 100,000 population, while Ontario had 170, Nunavut reported 163, and Saskatchewan had 138.

“I know all of this is discouraging to hear,” Kenney said. “Nobody wants to be here, especially after 14 months with multiple waves of this pandemic.”

“But our commitment to the health and safety of Albertans must come first.”

A doctor co-chairing the Edmonton Zone Medical Staff Association's pandemic committee says there is a good probability the measures, though imperfect in his opinion, will help numbers come down, but says compliance, teamwork and kindness of Albertans will be necessary.

He believes the government should have taken stronger action in the second wave, when experts foresaw the potential effect of emerging variants, and generally that schools shouldn't close before a society-wide lockdown.

"Where we are now is very close to the last moment where you couldn've made this decision without having the drastic consequences the premier was talking about."

He added: "We nee all Albertans to behave like the team we know they can be becuase they were in the first and second wave."

ENFORCEMENT OF MEASURES TO INCREASE

The premier added that there will be “tougher enforcement” protocols for repeat offenders but did not give further details.

“We will not tolerate those who endanger the health of their fellow Albertans,” he said.

Kenney and Dr. Deena Hinshaw will host a press conference on Wednesday at 10 a.m. to answer questions from the media and provide a recap of the new COVID-19 restrictions implemented.

The premier and the chief medical officer of health will be joined by Minister of Health Tyler Shandro, Minister of Education Adriana LaGrange, and Minister of Justice Kaycee Madu.

Rachel Notley, leader of the Official Opposition, reacted to the new restrictions Tuesday evening saying the restrictions were confusing and left Albertans with more questions than answers.

“Albertans, you are frustrated, confused, you are angry and you are scared,” Notley said. “This announcement should have helped. I am afraid that it has mostly just created more questions.”

She added that the measures only applying for a few weeks and then being re-evaluated creates instability for Albertans and business owners.

“He is undermining people’s ability to plan,” she added. “These new measures will have an immediate impact on Alberta small business owners struggling to stay afloat.” 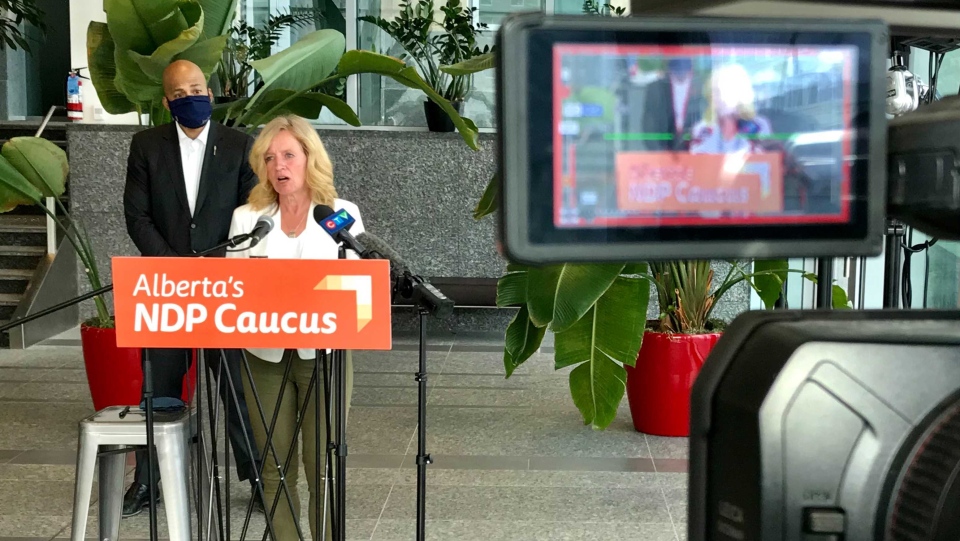 The NDP called on the province to enact stronger fiscal supports for small businesses so that they can continue to employ Albertans.

Notley also criticized Kenney’s plans for schools since he kept claiming they were safe for in-person learning and has now ultimately moved them online with only a few days notice.

“Kenney minimized the problem in our schools for months, and now today hundreds of thousands of students have been forced out of their classrooms,” she said. “He claimed schools were safe and sat on his hands while school boards, teachers and parents begged for help. He’s failed each and every student in our province.”

The leader of the NDP also criticized Kenney for not implementing a stronger sick pay program to ensure cases would not spread in places of employment.

“I fear so many will still be forced to choose between staying home to help prevent transmission and paying their bills,” she said. “Our caucus would pass a bill on sick pay in a matter of hours, if only the premier would take the padlock off the legislature.”