EDMONTON -- The Telus World of Science is getting a lot more hands-on.

The brand new Science Garage at TWOSE opens its doors Dec. 21 and features a wide range of scientific offerings from 3-D printers to wind tunnels.

Telus World of Science is hoping to drive more people to the facility with a renovation to a popular exhibit.

The garage has seen a lot of traffic since it opened in 2015, and now there’s even more room to cruise around.

The exhibit expanded into what used to the be the Body Fantastic Gallery. It's now home to a workbench full of materials and parts to make projects from and organizers say it’s the perfect place to park for a few hours and tinker. 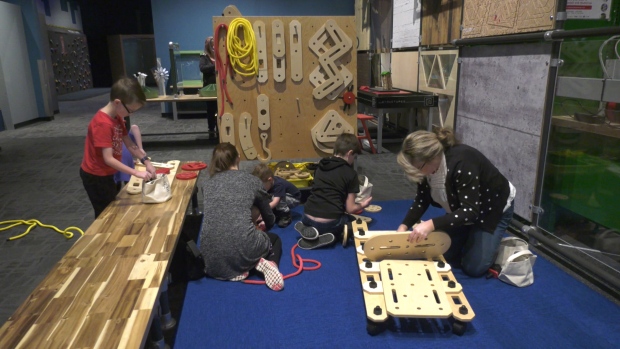 "We really like the garage metaphor because this is a place where you have tools and where you can get dirty and it's where you do your projects," said TWOSE president Alan Nursall.

“This is where people come to do stuff…this is where you build circuits, and you do things on the 3-D printer and you build catapults and where the robotics team can work on their robots.”

Jennifer Gemmell, staff scientist for The Science Garage said the previous incarnation of the garage was so popular, it necessitated more room.

"Especially in the workshop, where guests of all ages often conduct large projects, such as collaborative builds, facilitated workshops and design experiments," she said.

The new Science Garage is the latest reveal in the ongoing 20,000-square-foot expansion of the science centre, which is slated to continue in the new year.