'No stopping that train': Where the mayoral front runners stand on the West LRT 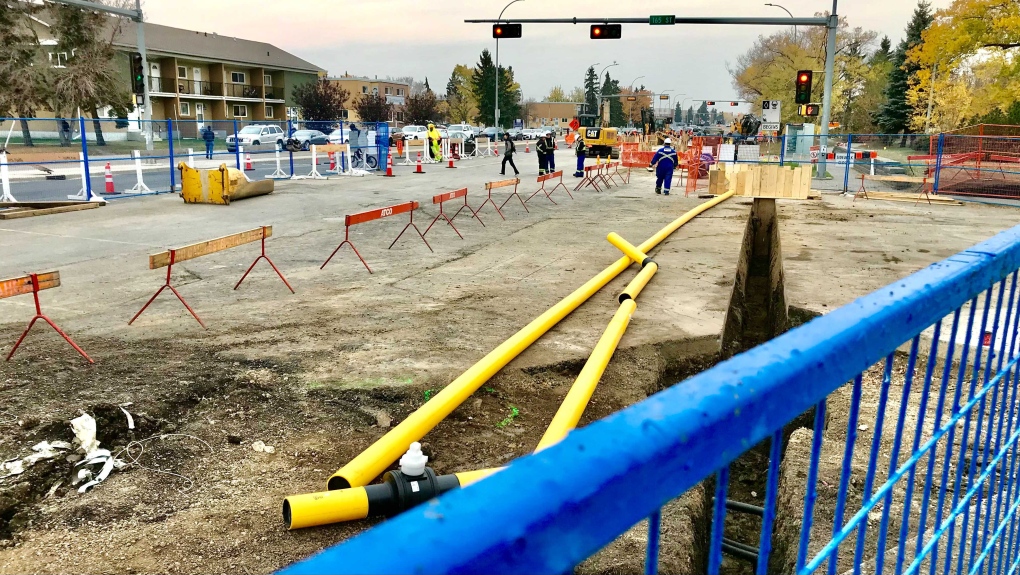 The land is bought, trees have been cut, and utility workers were still tearing up streets - but a mayoral candidate’s last minute promise to “pause” the West LRT expansion continued to send shockwaves through the campaign on Tuesday.

Cheryll Watson brought the issue to prominence Friday with a pitch to stop construction and use the cash to focus on “core services” instead.

“I understand Edmontonians get frustrated when we review decisions. So do I, but the reality is our economy and our financial state has changed,” she said in a YouTube announcement posted Friday.

“A transition to full telework could reduce the total number of Edmonton transit commutes in a year by 43 per cent. That's huge. That's a very dramatic reduction in the demand for public transit and we have a very uncertain future,” she said, quoting a 2021 StatsCanada report.

Watson hinted at her announcement on Sept. 23 during the Downtown Business Association forum.

“We’re in a global pandemic right now. And our work and commute patterns don't look anything like it did a year and a half ago, or two years ago,” she said to a question about infrastructure.

She did not specifically say then that she wanted to scrap the second half of the Valley Line, that’s scheduled to connect Churchill Square with West Edmonton Mall by 2026 or 2027.

'NOT REALISTIC' TO CANCEL NOW: OSHRY

But Watson’s idea isn’t sitting well with other candidates.

Michael Oshry said the project is “not cancellable.”

“I was a city councillor that pushed for it, and whether you like it or not now, the land has been expropriated, there’s no stopping that train. So we have to make sure that’s done on time, on budget,” he said at the Sept. 23 forum.

Oshry reaffirmed his support for the project on Friday.

“Make it efficient to increase users. Anyone who says we can stop it now is not realistic,” he tweeted.

SOHI: THE 'BIGGEST PROPONENT' FOR LRT

Candidate Amarjeet Sohi also confirmed he’s all in on completing the Valley Line.

“I'm the biggest proponent of continuing to build our LRT system. Yes, we need to improve the procurement process and I will use my experience to do that,” he said at the forum.

EDMONTON 'LOCKED IN' ON LRT: KRUSHELL

Kim Krushell supports building the tracks - but she has concerns about how the line will run.

“The capital deal on the West LRT is locked in. My primary concern at this point will be on the operations side, and any lasting budget impacts of a deal that doesn’t include railcars. I encourage our current Council to get this resolved as soon as possible,” she tweeted after Watson’s announcement.

Krushell shared Watson’s concerns about the budget and the pandemic.

“I do think with the pandemic, the game has changed. We don’t know with commodity prices what we’re going to be facing. And we don’t actually know our full fiscal picture…so I believe that we do need to review our capital plan,” she said at the forum, not naming any projects she’d consider cancelling.

Candidate Mike Nickel, a current city councillor and widely considered a frontrunner, has never been a fan of the west LRT.

“Before you build anymore LRT, maybe you should fix the one we have, the Metro Line, and finish the one you’re working on, the Valley Line South,” he argued, saying he preferred automated bus rapid transit instead.

On Wednesday, Nickel repeated his criticisms of the project. He didn't explicitly say it should be cancelled, but wants the project reviewed.

"It is not an LRT, it is a slow-moving tram," his campaign team wrote in an email.

Newly disclosed documents show federal intelligence officials warned decision-makers that the police dispersal of 'Freedom Convoy' protesters in Ottawa last winter could prompt an 'opportunistic attack' against a politician or symbol of government.

Increased loneliness, isolation a side effect of inflation for Canadian seniors

Canadian seniors are being forced to make tough choices, cutting out frills and nice-to-haves in the face of near 40-year-high inflation rates. But older adults also face a unique, less-talked-about challenge — the increased social isolation that experts say often occurs as a result of high inflation.

A spate of explosions and a fire that was still burning Wednesday have turned Russian-annexed Crimea from a secure base for the further invasion of Ukraine into the latest flashpoint highlighting Moscow's challenges ahead in a war that is nearing the half-year mark.

More than half of Canadians say the pandemic negatively impacted their children: report

A new report has found that more than half of Canadian parents report 'negative impacts' on their children after two years of living through the COVID-19 pandemic.

Wyoming Rep. Liz Cheney, Donald Trump's fiercest Republican adversary in Congress, soundly lost a GOP primary, falling to a rival backed by the former U.S. president in a rout that reinforced his grip on the party's base.