Officer slashed with knife by man who ran through airport security: RCMP

Officer slashed with knife by man who ran through airport security: RCMP

Charges have now been laid after a man barged through security at the Edmonton International Airport on Saturday.

Police initially said that the man was brandishing a knife when he ran through security around 8:30 a.m.

Mounties now say the man rushed through security unarmed, and ran into a nearby Chili's restaurant where he armed himself with a piece of cutlery. 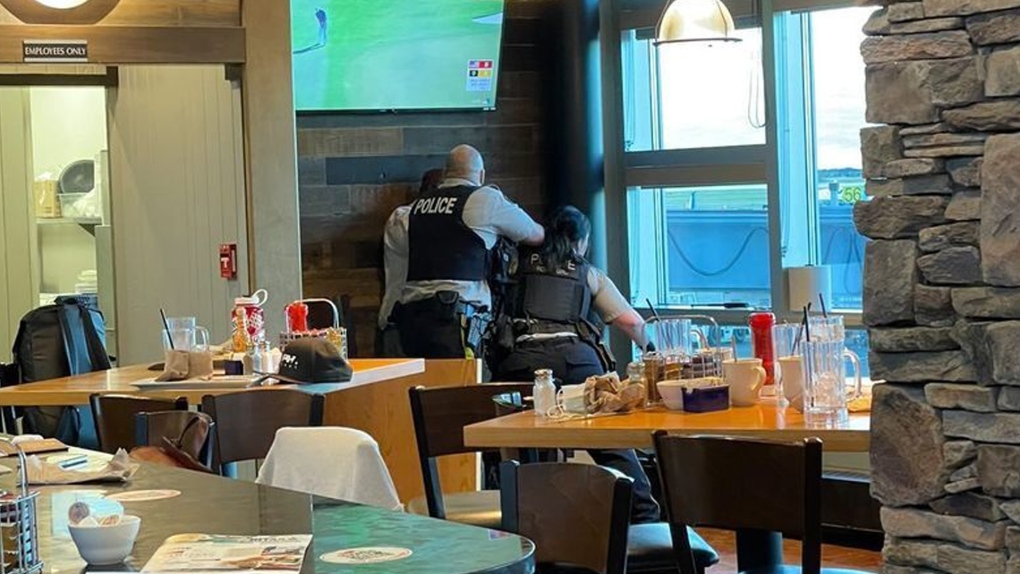 Airport security called police when the man was in the restaurant.

“Around 8:30 a.m. security at the airport identified male who went through security at a high rate of speed and missed checkpoints,” Cpl. Troy Savinkoff told CTV News Edmonton.

“Security followed him to a restaurant and watched him and called RCMP.”

RCMP arrived and an altercation ensued when an officer attempted to arrest the man.

Savinkoff confirms the officer was slashed with the knife. The officer was taken to hospital by EMS in stable condition, but has since been released.

A second officer suffered minor injuries but was not hospitalized.

The assailant was also taken to hospital with minor injuries, and was released into police custody.

A 37-year-old Fort McMurray man has now been charged with aggravated assault, assault on peace officer, assault, resist arrest, two counts of mischief, possession of a weapon for a dangerous purpose.

He remains in custody and will appear in Leduc Provincial Court on Sept. 28.

Police do not know why the man was at the airport or what his motivations were, but there is no indication this was a terrorist incident.

Savinkoff says the officer who was injured is based at the airport.

Health care has surpassed inflation and jobs as the top national issue of concern, according to Nanos Research’s weekly tracking, as Canadians read reports of hospital emergency rooms under strain and a 'tripledemic' of flu, RSV and COVID-19 cases spiking across the country.

Canada exits the 2022 FIFA World Cup with three losses to its name, registering the joint-worst record in tournament history, but head coach John Herdman and his players remain hopeful the program can become something special after this jolting learning experience.

From boosting cash on hand to cutting staff, Canadian banks are taking a variety of strategies to prepare for a widely expected economic slowdown in the year ahead.

List of areas the Alberta government accuses Ottawa of overreaching

When the Alberta legislature resumed sitting Tuesday, the first bill introduced by the United Conservative Party government was one aimed at shielding the province from federal laws it deems harmful to its interests.

Renewed allegations of racism at Buckingham Palace threatened to overshadow Prince William's trip to the United States after campaigners said the palace needed to acknowledge a wider problem that goes beyond one member of staff.